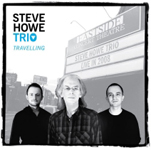 The boundary between progressive rock and jazz is a fluid one—indeed, it's increasingly unrecognizable, as some of the finest musicians around move effortlessly between and within the genres. Thus Robert Fripp, one of prog's most influential players, can be found in the company of jazz musician Theo Travis, who is himself a member of Soft Machine Legacy and Gong. Steve Howe, another prog rock guitar great, is equally adept at moving across the genres. But while Fripp and Travis inhabit the improvisational, soundscape end of the spectrum, Howe has chosen to work within a style of jazz that would be readily recognizable to players such as Wes Montgomery and Kenny Burrell—major influences on the young guitarist, back in the 1960s. Travelling is the Steve Howe Trio's second album: a live recording from concerts in Canada and England during 2008. It beautifully showcases Howe's approach in its collection of jazz standards, early Yes songs and Howe's own more recent compositions.

Drummer Dylan Howe, Steve's son, and organist Ross Stanley complete the trio. Both players have solid reputations of their own, and they are central to this album's success, whether they are setting up strong grooves to underpin Howe's guitar or taking lead roles themselves. Howe plays his trademark Gibson ES175 guitar with few if any additional effects, giving a clear, pure, tone to his sound throughout the album.

Howe's decision to incorporate Yes tunes into the trio's repertoire lends a pleasing variety to the album. Tunes such as "Siberian Khatru" sit surprisingly well next to jazz numbers like Jimmy Smith's "Blue Bash" and Burrell's "Kenny's Sound." Of Howe's later solo compositions, "Momenta" is particularly effective, acting as something of a showcase for all three musicians.

Travelling includes live versions of ten of the tunes from the Trio's first album, The Haunted Melody (HoweSound, 2008). The live tracks stay faithful to the arrangements on The Haunted Melody but are imbued with greater warmth than the studio versions. This is due in part to the inclusion of audience sounds—applause, whistles and cheers punctuate the album—but it's also thanks to the excellent production work, especially the concert recordings by Ric French and Dave Wilkerson.

Travelling is an immediately accessible album. The selection of tunes avoids the clichéd American Songbook choices, and the reworking of classic Yes tunes enables them to blend together with the more overtly jazz compositions. The result is a fascinating mix that highlights the instrumental combination and talents of The Steve Howe Trio.