JazzKamikaze: Travelling at the Speed of Sound 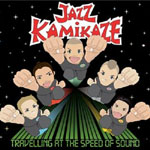 If it ain't broke don't fix it. Isn't that what they say? Stagnation is death. Don't they also say that? JazzKamikaze no doubt had those advising it to repeat the formula that worked so successfully on its acclaimed debut, Mission 1 (Stunt Records, 2006). Others probably urged evolution, progress, fresh sounds. The five musicians have opted to plot a flight path right down the middle on Travelling at the Speed of Sound, and they do so in some style.

The music on Travelling at the Speed of Sound broadly follows the pattern of Mission 1—strong compositions, memorable hooks, fierce, imaginative solos from guitarist Daniel Heloy Davidsen and saxophonist Marius Neset, and an incendiary rhythm section. There are also signs of musical growth, and a significant new dimension to the music which will surprise a few.

For two numbers, the funky "Up to No Good and the bop-ish "Airborne, the quintet is augmented by trumpeter Matt Schulman. Schulman slips effortlessly into the JazzKamikaze groove, his playing confident and adventurous with and without the mute. On the latter tune, double bassist Kristor Brodsgaard and drummer Anton Eger work overtime as the band rotates solos. As on Mission 1, Eger contributes to the songwriting too, with the wonderful composition "Tribute to a Legend.

It is not so much the broadening of its sound with the addition of trumpet that marks the band's evolution, but a significant shift in compositional style which characterizes the Schantz/Davidsen tune "Everest and the Schantz number "Until the Sun Comes. On both numbers the band eschews solos, basing the songs on melody and delightful chord progressions which build to a climax. On the latter tune, the addition of a string section adds luster and a Philip Glass-type gravitas to an already powerful song. On these two numbers JazzKamikaze bridges the sonic gap between Genesis and Radiohead—majestic, epic songs which embed themselves in your mind. JazzKamikaze gives EST a run for its money.

There is a cameo appearance by rapper Big D on the ninety-second "Ten Indian Commandments, a song which sounds like a classic first set closer. Introducing the band members with some panache, he concludes: "Stand up ladies and gentlemen and put your hands together for the JazzKamikaze —a sentiment which will surely be echoed by a great many.