By EDWARD BLANCO
September 15, 2009
Sign in to view read count 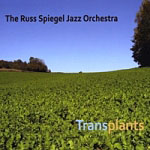 Veteran jazz guitarist Russ Spiegel has always had an affinity for big band music, from his days of performing with the European-based Landes Jugend Jazz Orchester Hessen, The Bill Warfield Big Band, and his own Russ Spiegel Big Band, comprised of top German and international musicians. He continues his love affair of progressive ensemble music on the debut recording by The Russ Spiegel Jazz Orchestra, Transplants, with big band arrangements of six originals and three covers, and featuring some of the finest players from New York.

Spiegel provides all of the arrangements, including fresh treatments of Ray Noble's "The Very Thought of You," Duke Ellington's oft-recorded "I Let a Song Go Out of My Heart" and Paul Weston's "I Should Care." The twenty-piece orchestra makes an immediate impression, opening up with a burst from the brass on the fiery Spiegel original "Count Up," featuring tasty solos from saxophonist Tim Armacost, drummer Owen Howard, and of course, a light touch from the guitarist. Guest vocalist Michael Camacho does the honors on "The Very Thought of You" and "I Should Care," where trumpeter Sharif Kales and saxophonist Craig Yaremko provide the solos. Camacho is heard one more time on the funky and spicy "Chain Reaction."

With an introduction from flautist Arun Luthra, the meat of "Kangaroo" is gently taken over by Spiegel with some beautiful chords, before turning it over to pianist Rachel Eckroth, who then hands it back to Luthra, this time on soprano, polishing off one of the album's standout pieces. The band roars mightily on the big band arrangement of "Number One," another display of power playing from the group. An unselfish performer, Spiegel makes sure that many members of the band have their chance to display their appreciable skill with plenty of solo space throughout the album. This is clearly the case as trumpeter David Smith plays a pronounced role on the nine-minute "Undertow," blowing down the house with his performance.

Smith tees off once again, this time on the feisty rendition of "I Let a Song Go Out of My Heart," with accompaniment from saxophonist Dan Pratt. Starting and ending with a little free style play, "The Rub," is a hard-driving number featuring the drummer's handy work along with crisp guitar riffs from Spiegel and embraced by supportive background play from the entire band. Ending with "I Should Care," Spiegel's orchestra completes a marvelous command performance that lovers of progressive big band music will savor. Containing sparkling new material, innovative arrangements and excellent musicianship, Russ Spiegel's Transplants clearly delivers on many fronts and deserves an unquestioned nod of approval.

Count Up; The Very Thought of You; Kangaroo; Number One; Chain Reaction; Undertow; I Let A Song Go Out of My Heart; The Rub; I Should Care.

About The Russ Spiegel Jazz Orchestra