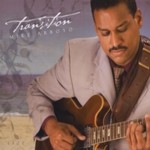 Mike Arroyo, from Vega Baja, Puerto Rico is no ordinary jazz artist. He believes in a higher calling where his devotion to music is secondary to his commitment to his faith. Arroyo is a jazz guitarist who is first and foremost a full-time pastor with an almost religious fervor to spreading the music as well as the Gospel. After his first release, My Jazzy Mood (Self Published, 2006), Arroyo marks his second album as leader celebrating his Transition into the religious arena with an album of musical highlights that touch on Latin, bossa, samba, ballad, and waltz styles of jazz packaged nicely in an eleven-piece disc that's engaging from start to finish. Though some of the tunes have a religious connotation by reference that include "God" in the title, with the exception of a duet with vocalist Millie Larancuente on "El Cuidara de Mi," the music is anything but religious—just jazzy in every respect.

The album is dedicated to one of Puerto Rico's master guitarists, Maximo Torres, who performs on his own "Recuerdos de Humacao," essentially a light soft ballad featuring Torres delivering crisp delicate guitar lines alongside Arroyo. Except for the Arthur Herzog/Billie Holiday standard "God Bless The Child," which Arroyo performs as a brief solo, the remainder of the repertoire comes from lesser-known composers which, interestingly enough, does not make the music any less entertaining or vibrant. As example of this is Armando Aquino's opening "Street Jam," a percussive and explosive Latin jazz burner inviting sizzling play from trumpeter Michael Rodriguez, pianist Pedro Bermudez, and finally, Ivan Renta on tenor.

Arroyo leads the music in an almost Wes Montgomery style on the expansive "The Whisper of God," sharing the rhythm with Renta on soprano. The music remains in the light mode on "Stay With Us," featuring some of the guitarist's delicate finger picking on the strings. Arroyo expands his musical vocabulary, playing soothing guitar riffs on the perky smooth-style "Hay Una Uncion," featuring the keyboardist on a fine Fender Rhodes dance.

Changing styles once again, Arroyo and band move the music in a steamy direction with a dynamite performance on the Brazilian-flavored "Sambinha de Esperanza," on which Renta tears off an electrifying soprano romp matching the guitarist's hot lines. Along with "God Bless The Child," there are two more delicate solo performances from Arroyo—"Verde Luz" and the minute-plus finale of "Trust and Obey." There is a plethora of jazz guitarists producing albums these days but few do so with such passion for the music and a mission to accomplish. Christian musician Arroyo completes another outstanding recording without the benefit of featuring big name jazz artists, performing uncommon material and depending on limited financial resources. Still, despite these negatives, Transitions is an excellent recording sure to be enjoyed by all who are lucky to sample it—something a man of faith would already know.