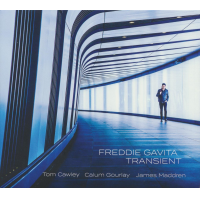 Freddie Gavita graduated from London's Royal Academy of Music in 2008 after having taken a degree there in jazz trumpet under the watchful eye of Nick Smart, the Academy's Head of Jazz and a virtuoso trumpet player himself. Gavita is increasingly in demand both in big bands (including Ronnie Scott's Jazz Orchestra) and small groups alike (including The Ronnie Scott's Club Quintet). He's also played with Peter Erskine, Curtis Stigers and Gregory Porter to name just a few. Born in 1985 in Norwich, England, Gavita took an early interest in music playing in his school's jazz band and later in the Norwich Students' Jazz Orchestra. Transient is Gavita's long-anticipated and very welcome debut album.

The set opens with "Strimming The Ham," a breezy modal piece redolent of classic sixties Blue Note Herbie Hancock courtesy of Tom Cawley's irresistible piano. Dedicated to the memory of the late British pianist Richard Turner, "Turneround" is arguably the strongest piece on the album, adorned with a fiercely memorable vamp. The dulcet opening to "Beloved" is vaguely reminiscent of the famous largo section of Antonín Dvořák's 9th (New World) Symphony before transitioning into a gentle Kenny Wheeler-esque ballad.

The aptly named "Sprezzatura"—an Italian word meaning an assumed air of effortlessness—is a perfect medium in which to demonstrate Gavita's chops which are displayed with insouciant panache. Numbers such as "Lion-O" replete with labyrinthine themes and tricky time signatures contrast with more easy-going ones such as the swinging "Pull Yours Socks." Even "The Buffalo Trace," a bluesy finale, offers yet another example of this trumpeter's immeasurable versatility. Gavita's prodigious talent, both in terms of his playing and composing, is patently obvious and as witnessed by this engaging first outing, his star is most definitely in the ascendancy.