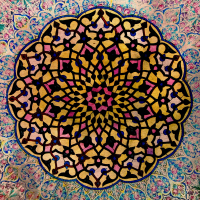 The name Organic Pulse Ensemble suggests a largish line-up, but Transcending The Sum is actually the creation of just one musician, multi-instrumentalist Gustav Horneij. Horneij does, however, definitely transcend the sum of that unitary part, overdubbing away to recreate a six, seven or eight piece band, with front line, rhythm section and all. As the cover art indicates, his bag is spiritual jazz.

Horneij, who is based way up in the chilly north of Sweden, is a self-taught musician who started making music on turntables—scratching, sampling and creating beats. His love of jazz grew out of the vinyl he sampled, a substantial proportion of which came from his father's record collection. This treasure trove seemingly included a hefty chunk of Strata-East, Black Jazz, Impulse, El Saturn and related releases from the 1970s. As his enthusiasm for the music grew, Horneij began to build live instruments into his tracks, teaching himself to play bass guitar and drums. Saxophones, other woodwind, 6-string guitars and keyboards followed. A few years down the line, he built a modest home studio and began recording. So far, so very good.

Transcending The Sum, released on Belgium's Urban Waves label, is Horneij's first record to be other than self-released. It shows great promise. Modes, vamps and trippy textures are the mesmeric order of the day. Horneij is not, as he admits, the world's greatest technical virtuoso, but he has a gift for layering sounds into pleasing packages. His arrangements do, however, tend to be a bit samey. In a way, this works to the album's advantage, but more variety in instrumentation, dynamics and pace would enhance it.

An emerging artist whose progress promises to be worth watching.