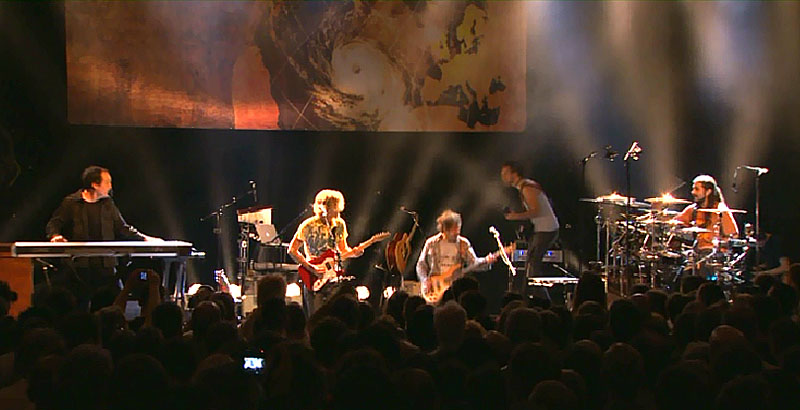 When Transatlantic wowed a Montreal, Canada audience back in April 2010, as part of its Whirld Tour in support of the 77-minute progressive rock epic, The Whirlwind (Radiant/Metal Blade, 2009), a few things stood out. First, for a group who, in the course of over three hours, played only six songs—four in excess of 30 minutes—Transatlantic's ability to not just navigate, but remember a seemingly endless slew of complex arrangements—filled with irregular meters, mind-numbing stops and starts, and sound worlds ranging from the near-ambient to the ear-shattering and anthemically transcendent—seemed almost impossible to recreate, night after night. And yet, based on web reports and Whirld Tour 2010: Deluxe Edition, clearly they did.

Second, while Transatlantic's primary singing voice is that of keyboardist/guitarist Neal Morse—co-founder of Spock's Beard, but leaving both that group, and Transatlantic, at least for nine years, when he became a "born again" and decided to pursue a kind of progressive Christian music on albums like the recent So Many Roads (Radiant, 2009)—it became clear just how democratic the band really is, and that now ex-Dream Theater drummer Mike Portnoy is as much, if not more, a spokesperson for the group.

Third, at least based on the Montreal performance, if there is any single star in the group—despite everyone, including Pain of Salvation singer Daniel Gildenlöw (recruited as a member of the touring band playing guitars, keyboards and percussion), playing at an incredibly high level of energy and commitment—Swedish guitarist Roine Stolt stood out, with solo-after-solo of tasty tones and remarkable invention that transcended his own fine projects, including his flagship The Flower Kings and, most recently, Agents of Mercy, which released Dramarama (Reingold Records) in the fall of 2010.

And now, with the 2010 tour but a memory, comes Whirld Tour 2010, a document of the group's Shepherd's Bush, London show, released in three versions: a double-DVD, triple-CD (of the same show, but remixed) and the Deluxe Edition, with all five discs. Watching the show, and reliving the Montreal show through it, a couple more impressions dominate. First, this is a band that, despite playing for over three hours, is having fun, each and every night; in fact, everyone appears to be having the times of their lives, and why not? As great as their individual projects are—Pete Trewevas, a thrilling bassist/vocalist, gets the opportunity here to play in ways that his work with Marillion only intimates—Transatlantic surpasses all of them. If there's ever been a case of the whole being larger than the sum of its parts, Transatlantic is it. Second, while there are plenty of bands that exude energy, there's an unmistakable sense of optimism that's felt throughout the show. There's plenty of talk about the spiritual nature of the lyrical content, and looking into the backgrounds of most of Transatlantic's players—not just Morse—it's clearly a driving force.

But what makes Transatlantic work where other groups might fail is that, as much as the lyrical content is about transcendent glory and deeply religious sentiments, the group never proselytizes; it's personal, autobiographical and somehow more reporting than preaching. This is still rock and roll, after all, albeit of the most challenging nature, and when Portnoy crowd surfs in the middle of the group's "Stranger in Your Soul"—which, combined with the shorter ballad, the title track to the group's Bridge Across Forever (Radiant, 2001), forms an encore that runs nearly 40 minutes—it's not something you'd expect to see from groups singing about surrendering to God.

As long and complex as the episodic epics are, and as many traps as the group sets itself to fall into self-indulgence (there's no shortage of instrumental pyrotechnics and bombast: this is prog rock, after all) Transatlantic completely avoids the bloated sense of self-importance which has scuttled legacy groups like Yes and Emerson, Lake & Palmer. Instead, when it breaks into snippets of Santana's "Soul Sacrifice," Deep Purple's "Highway Star"—even a little Star Wars and the McDonalds' "I'm Lovin' It" theme—it's all playful and fresh, even though it's something the group does each and every night. Everyone switches instruments near the end of "Stranger in Your Soul" and, instead of being impressive in just how good, for example, Neal Morse is on drums, it's more just good fun. Smiles, nods and eye contact are definitive throughout the show, and when it's all over, it's an emotionally uplifting experience...something few concert DVDs manage to impart.

The bonus features on the DVD range from essential to, at the very least, fun for one watch. A two-hour behind-the scenes documentary, compiled from hand-held video footage made by various members of the touring entourage, goes right back to the group rehearsals, and even documents the moment when Portnoy suggests that, for this tour, Stolt sing lead on the anthemic ballad "We All Need Some Light," normally sung by Morse. Portnoy, who was the driving force behind getting the group together in the first place, is like a lightning rod throughout, and with his recent departure from progressive metal superstar Dream Theater, which he cofounded in the late 1980s, the real question now, with the Transatlantic tour over, is: what next? 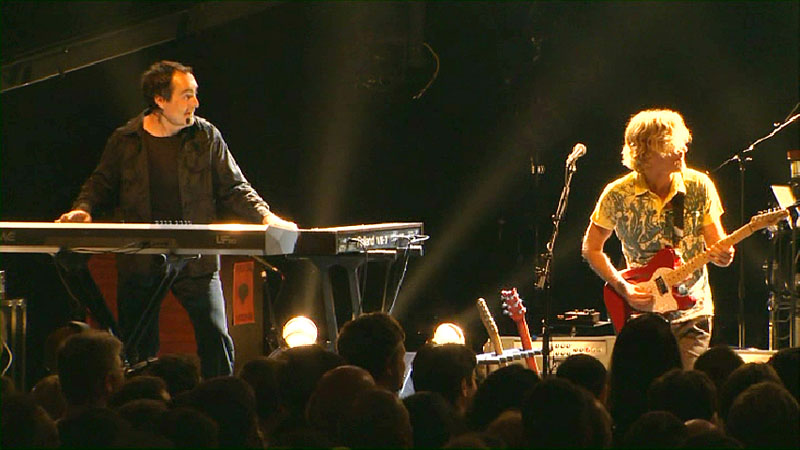 From left: Neal Morse and Roine Stolt of Transatlantic

And while the concert DVD sticks to the tunes, live clips from throughout the tour show a band not sticking solely to a script, both in its interactions with the audience, and when it occasionally dissolves into garage band silliness, at one point breaking into Deep Purple's "Smoke on the Water," with Portnoy playing bass and singing. Stolt may be soft-spoken, with Trewevas a close second, but they're well-represented throughout.

And there it is, again: fun. Even the 20-minute interview with the entire group, from the 2010 High Voltage Festival, is informal, joking about how the ball was always in Morse's court during the hiatus, and that Gildenlöw had Portnoy guest on a Pain of Salvation, leaving a message for God to get to Morse, ultimately leading to Transatlantic reforming in 2009. It's something that could be misconstrued as serious, but in the delivery, what becomes clear is that as much as Morse's religion is an undeniable part of the picture—respected and considered—it doesn't stop the group from being just a bunch of guys, hanging and playing; this ain't no Christian Right. Even more interesting is their revelation of the conflicts and challenges that cropped up about in the making of The Whirlwind: Stolt wanting shorter songs; Morse wanting a double-album; Trewevas writing while on tour with Marillion; and Portnoy, as Morse calls him, "the great gleaner."

The video is a pro, multi-camera shoot in widescreen, with frequent edits that still manage to flow and impart the visual energy of the show. Sonically, it's clean, crisp and big as life, with the CD mix a little deeper in the bass end, especially with Trewevas' bass pedals. And as a bonus, a performance from the 2010 High Voltage Festival captures Transatlantic covering an early Genesis epic, "The Return of the Giant Hogweed," from Nursery Cryme (Charisma, 1971), with special guest, ex-Genesis guitarist Steve Hackett. 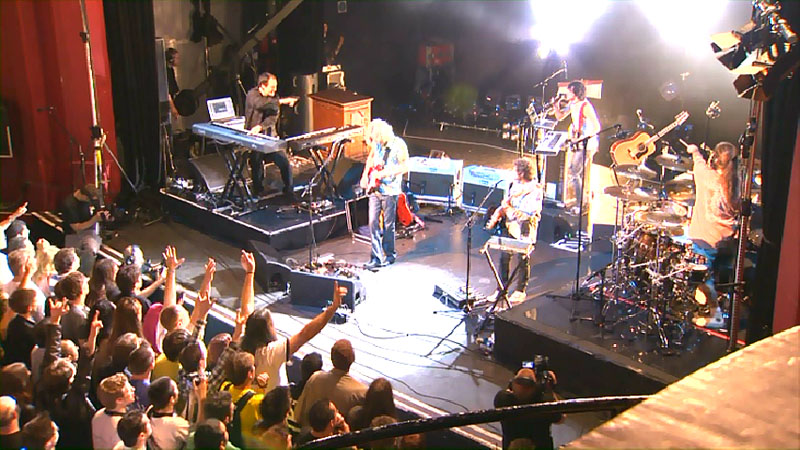 In the interview, Stolt says, "it almost feels like the audience was listening with their eyes, and they were so happy—from the first note—to see us together. So the small issues that we worry about—the monitors, or a few bum notes—they don't care, they just love to see us onstage, and that's half the concert, I think. And you can feel it; you can feel it very strongly." Watching Transatlantic: Whirld Tour 2010 may not be exactly like being there, but it's extremely close. With all the positive energy and strong vibes that are somehow captured on both the DVD and CD, it's a live classic that will be the litmus test for progressive rock acts to follow, in years to come.