By FLORENCE WETZEL
November 7, 2004
Sign in to view read count 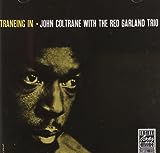 In August 1957, John Coltrane was at a very interesting point in his career. His apprentice years in big bands long past, he had recently left the seminal Miles Davis quintet and was in the midst of a six-month run with Monk at the Five Spot. At the height of this fertile period, with so much still ahead of him, Coltrane recorded the album Traneing In , accompanied by the illustrious Red Garland Trio.

The CD consists of five songs, including Coltrane originals "Traneing In" and "Bass Blues." The highlight is the deceptively named "Soft Lights and Sweet Music," a four and a half minute tour de force featuring a lightning-fast Coltrane with Garland matching him every step of the way. Coltrane plays straight ahead on Traneing In , but he is bursting with his legendary fluidity and intensity, his warm, strong tone going straight to the heart. As for the trio, their work is one of the defining sounds of the '50s and indeed jazz itself: Red Garland's light, masterful touch, Paul Chambers' singing bass and Art Taylor's rock-solid drum work combine to create the very definition of rhythmic cohesion.

What's striking about Traneing In on this recently remastered reissue is how fresh it sounds. It's difficult to believe this music was recorded almost fifty years ago, and it's not just due to the digital face lift; the musicians are vital and inspired and they infuse each song with an inherent, timeless swing. There are pleasures to be found in all stages of Coltrane's development, but his Prestige recordings, which also include Soultrane , capture his foundational gifts for swing and blues. You can't go wrong with this one.