By REX BUTTERS
November 9, 2018
Sign in to view read count 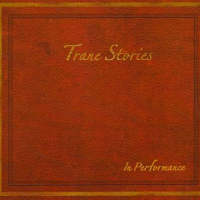 "My music is the Spiritual expression of what I am: my faith, my knowledge, my being. When you begin to see the possibilities of music, you desire to do something really good for the people, to help humanity, to help humanity free itself from its hang ups. I want to speak to their souls." John Coltrane, quoted on Trane Stories

A seasoned group of LA's finest, spearheaded by pianist, Theo Saunders, brings us a unique intimate portrait of saxophonist John Coltrane, just in time for the 92nd anniversary of his birth. But unlike other tribute/cover albums inspired by the influential saxophonist, Trane Stories skillfully incorporates carefully chosen key quotes from Coltrane based on published interviews, as well as Coltane related poems by Amiri Baraka and Quincy Troupe, and added lyrics.

Of course, having vocalist supreme, Dwight Trible, delivering the lines and the lyrics deepens the link to the man himself. Trible's flawless interpretation and technique has delighted West Coast audiences for decades. On Trane Stories, Coltrane's "Dear Lord," and "Wise One" feature the lyrics he wrote for his gorgeous, "Living Water (Katalyst Entertainment, 2004). Throughout the Trane Stories session, Trible voices adventurous phrasing that is flexible and nuanced and intertwined in the melody.

Recorded live and on fire, the six tracks feature five familiar Coltrane compositions, and "Afro Blue" by Mongo Santamaria. "Dear Lord," opens the set, with drummer Smith juggling effortless polyrhythmic brush work, leaving bassist Franklin and Saunders space to work with impressionistic understatement. Obviously, in any Trane-based project, all ears are on the the horn player, and those ears are amply rewarded by Dr. Teodross Avery, who began his music career inspired by Coltrane's "Giant Steps."

Trible delivers Saunders' lyrics on "The Promise," followed by Saunders' first solo, taking a variegated excursion around the changes, sometimes weaving melodic flow, sometimes staccato chording, followed by the round buttery tone of Avery's soprano bubbling over with ideas.

On "Lonnie's Lament," after an eloquent solo bass intro, and Trible's wrenching delivery of Saunders' deeply spiritual lyrics, the singer torches/scorches lines by Amiri Baraka. Avery catches that fire and blows gasoline all over it. With no intention of missing out on the fun, Saunders unloads with the Franklin/Smith rhythm machine firing on all cylinders.

For "Crescent," Avery strolls with the changes, pushing the edges before busting through. Saunders tumbles over the heated throb of Franklin and Smith, bouncing off-tempo while spinning harmonic webs. Franklin distills it all into a potent exposition, both athletic and effortless, a dextrous fluent flow, before handing the spotlight back to Trible.

For anyone familiar with Trible's moving, heartfelt previously recorded performance of "Wise One," the take on the tune here is a jaw-dropper, a heart-breaker. He outgrows that elegant restraint and supersedes it with a volcanic palpable passion and naked urgency, his spiritual desire laid as bare as one finds in the raw fierce fervency of late Coltrane. Saunders paints with poise over the Spanish influenced changes. Deep listening informs Saunders' playing as accompanist, employing lightly impressionistic accents, counter points and octaves.

"Afro Blue" builds from Trible's performance of Quincy Troupe's "Ode to John Coltrane," with spacious support by Smith and Franklin. Saunders kicks it into gear, and Trible intones Oscar Brown, Jr.'s lyrics. At first break, Saunders feverishly builds cities of melodic structures. Avery unleashes a rich-toned soprano torrent over the scorched earth rhythm section. And just when you think this dizzying embarrassment of riches has peaked, in strides the fat tenor of fellow Coltrane acolyte, Azar Lawrence. An alumni of both Miles Davis and McCoy Tyner bands, Lawrence boldly enters the maelstrom blowing a gale force wind with a big, rough tone. Pulling out all the stops, Trible improvises a call and response with Avery, leaving it ALL on the stage.

Saunders & Co.'s ambitious audio documentary offers original glimpses into Coltrane and his legacy. It educates, entertains, and swings hard. Happily, the concert was recorded, mixed, and mastered by sound wizard Wayne Peet, with CD packaging adorned with portraits by photographer, Chuck Koton. More than a labor of love, Trane Stories is an act of devotion, to John Coltrane, to art, to a "Love Supreme."