By MARK CORROTO
February 17, 2014
Sign in to view read count 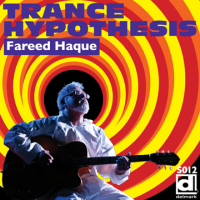 Guitarist Fareed Haque answers the musical question, what if Jimmy Smith's chicken shack served tandoori chicken? His world music DNA—son of a Pakistani father and Chilean mother grants him the authority to make blender drinks of all the musics that are stockpiled in his brain.

A master of music in jazz, classical, and the music of the Asian sub-continent, Haque has found a home in the bands of Paquito D'Rivera, Javon Jackson, Kahil El'Zabar, and Sting. His funk/jamband Garaj Mahal has releases multiple sessions and is a favorite in the jazz/rock fusion world.

His latest incarnation of east-meets-west is found on Trance Hypothesis, a fusion leaning closer to jazz than Garaj rock, yet retaining that Indo-Pak sound. His Flat Planet band is supplemented here with rich guest appearances. B3 organist Tony Monaco greases up "Chitlins 'n' Chutney" as accompaniment to guitar and sitar. The combination feels natural—pass the curry, gentlemen. Haque is well within his comfort zone here. He mashes tabla with drum machines on the title track, emphasizing Nirmalya Roy's vocals. The music slides between Bollywood and chamber pieces as naturally as Haque's globe trotting guitar.

He can march a blues like "Down To The Root" past traditionalists who won't bat an eye at the Indian flavor or drop some heavy sounds of tabla ("Srishti") or sitar and kalimba of Mathew Tembo ("Saba") with a simplicity and effortlessness only afforded to the consummate innovator. The music accomplishes a successful amalgam of folk musics—punjab, soul, world, electronica, and jazz.

Mellow Mood; Poonjob In The Punjab; Trance Hypothesis; Chitlins ‘n’ Chutney; Gnossienne 1; Hymn Of The Ancients; Saba; Srishti; In The Bollyhood; Down To The Root; Cowboys And Indians.