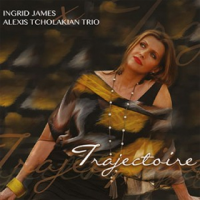 Trajectorie is a collaboration between the French pianist composer Alexis Tcholakian and the Queensland based vocalist Ingrid James. Their paths crossed in France when she was performing in a Paris jazz club when he approached her to write lyrics to some of his melodies as part of a vocal project with other singers in France. After completion of several songs together it felt right for them to do an album and in June 2014 Trajectorie was recorded in Paris.

Consisting mostly of their original compositions (the one exception being a comely version of the Jimmy Rowles standard "The Peacocks" with lyrics by Norma Winstone) this vocally outstanding album is now available through Newmarket Music in Australia. Throughout the recording Tcholakian's pianoforte is flawless on every track. His world class trio accompanies him dextrously on every move, slipping and gliding through the various stories of love, disillusion, hope and hip jazz life like a Maserati manoeuvring the climbs and gradients of a curving mountainous path. There are highs and lows at every turn and Ms James is always in command vocally at the wheel of this transcendently impressive outing with her flawless technique and gilded timbre. Adding to this are some magical improvisational moments from the wind section especially Simon Span—Hanssen's tenor on several tracks and Mariane Bitran's flute on the title track. Miroslav Bukovsky's sympathetic flugelhorn on "Night Reflection" mourns wistfully on a soulful ode to the brevity of life.

May their paths continue to cross in many harmonious musical journeys in the future.

A Timeless Place; Trajectoire; An Angel Touched Me; Blue Confluence; Jagged Thorn; Midsummer Flower; A Page Has Turned; Night Reflection; Circle Of Love; Dance With Me; It's Not Over.