Solveig Slettahjell-Knut Reiersrud with In The Country: Trail Of Souls

By BRUCE LINDSAY
October 21, 2015
Sign in to view read count 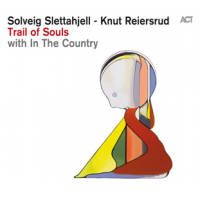 Vocalist Solveig Slettahjell and blues guitarist/harmonica player Knut Reiersrud record together for the first time on Trail Of Souls. They're joined by another three Norwegian musicians—pianist Morten Qvenlid, bassist Roger Arntzen and drummer Pål Hausken, known collectively as In The Country—on a programme of songs drawn from early blues, spirituals and classic rock songwriters.

The performances are uniformly high quality—Qvenild's synth and piano parts are subtle, Sletahjell's vocals are heartfelt and understated, Reiersrud's acoustic guitar is lyrical and flowing. However, the decision to take every song at a very slow pace, coupled with the songs' tales of sadness and failure, results in an overall effect that's more depressing than elating. Although Shakespeare's suggestion that "If music be the food of love, play on" is quoted on the album sleeve, there's little love in these lyrics—most of these songs paint a picture of a far from loving world.

"Sometimes I Feel Like A Motherless Child" combines Slettahjell's vocal with Qvenild's slow, stately, piano in a way that successfully emphasises the despair of the tale. "Borrowed Time" and "Is My Living In Vain," both gracefully performed, project similar pessimistic emotions. Even when Slettahjell sings—on "Trouble In Mind"—that "The sun's gonna shine in my back door someday" she sounds as if she doesn't really believe it'll happen.

The closest Trail Of Souls gets to a feel good song is Bill Withers' "Grandma's Hands." But even here, the grandparent comes across as someone to be respected, even feared, rather than loved. So, Trail Of Souls proves to be a musically successful meeting of spiritual and bluesy Americana with a Nordic jazz sensibility—as was intended—but one that veers too much towards a downbeat, even depressing, worldview.

Borrowed Time; Grandma's Hands; Mercy Street; Sometimes I Feel Like A Motherless Child; Come Healing; Is My Living In Vain; Holy Joe; Trouble In Mind; His Eye Is On The Sparrow; I Don't Feel Noways Tired; Soul Of A Man.