By EYAL HAREUVENI
October 18, 2012
Sign in to view read count 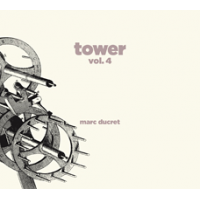 When French guitarist Marc Ducret began to plan his Tower book of works— Vol. 1 (2010) for a Franco-Danish quintet and Vol. 2 (2011) for a Franco-American quartet (both on Ayler)— he thought to transpose to his musical world a literary device that writer Vladimir Nabokov used in his 1969 book Ada. In this book, Nabokov weaves a whole labyrinth made of mirrors, memories and correspondences, eventually building a form which in turn leads to his other books, themes and emotions. Ducret, while waiting for the realization of Vol. 3 (for a sextet which has not yet been recorded), began playing solo improvisations on acoustic guitars, reassembling parts of different pieces in a totally different order, suggesting new and intimate insights into the same music.

Ducret is, no doubt, one of the most original guitarists and composer on today's scene. He has developed a highly personal musical language that does not bind itself into any genre, as well as a fluidity of ideas and an affinity for adventurous improvisation. In his hands a guitar is much more than a wooden instrument with strings. He has always possessed a rhythmic/percussive attitude, one that is used on "From a Distant Land" and its reprise, ..."A Distant Land," where his plucking and strumming references the percussive sounds of the Japanese koto and West African kora.

The open-ended and experimental "Sur l'Electricité," also heard on Vol. 2, drifts beautifully from one idea to the other, without ever surrendering to any coherent structure. On the short "Sisters," Ducret plays wisely with multiphonics, responding to the high strings' resonance, while "Real Things #2" and "Real Things #1" (both featured before on Vol. 1) correspond magnificently with Nabokov's literary form, both possessing complex, cyclical/labyrinthine structures that flow organically but never lose their tension.

"Ada" and "Sybil Vane" are both soulful, melodic pieces, with thoughtful use of space. Ducret concludes the recording with an engaging and concise cover of singer/songwriter Joni Mitchell's "Electricity," from For the Roses (Asylum, 1972), brilliantly interpreting her unique chord progression.

Fantastic. Ducret at his best.