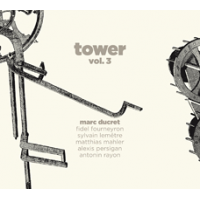 French guitarist Marc Ducret's new sextet, known also as the Real Thing #3 band, was supposed to mark the end of his Tower cycle of compositions, now spread over four discs and at least five projects: a solo guitar, quartet, quintet and the as-yet- unrecorded 12-member Tower-Bridge orchestra. This project was initiated by Ducret in 2008 as an attempt to mirror a musical texture to a chapter from writer Vladimir Nabokov's "Ada," in which he weaves a whole labyrinth made of fragmented memories and correspondences, eventually building a form which in turn leads to his other books, themes and emotions.

The last installment in the musical equivalent to Nabokov's labyrinthine texts is an unorthodox chamber comprised of three trombonists, mallet percussionist, pianist and Ducret himself on the electric guitar. This band reflects on Ducret compositions that were recorded for previous Tower installments, comments on these compositions and suggests radical musical "solutions" that put the music in a new light.

The first two compositions in this volume, "Real Thing #1 and #2," are from the first installment, recorded by the Franco-Danish quintet, known also as the Real Thing #1 band, on Vol.1 (Ayler, 2011), where trombonist Matthias Mahler also participated. The last two compositions, "Real Thing #3" and "Softly Her Tower Crumbled in the Sweet Silent Sun," were recorded originally in the second installment in this series by the Franco-American quartet, known also as Real Thing #2 band, on Vol. 2 (Ayler, 2011).

The recording of the French sextet took place after the Tower-Bridge orchestra toured with extended versions of the basic Tower songbook. The three-part rearrangement of the "Real Thing" pieces stresses its interlocking fragmented parts, patiently developed and accumulated in a manner that leaves a lasting impression. This impression is achieved not only by the originality of the musical ideas and imaginary reworking of these pieces, especially its use of tension-building, space, time and silence between the deep-toned trombones that often collide with the guitar, percussion and the piano, its experimental yet accessible sonic textures, but also by the highly personal and creative language of each member of the sextet. The intense reworking of "Softly Her Tower Crumbled in the Sweet Silent Sun" features even more dramatic and rhythmic elements.

Hopefully Ducret will keep developing these flexible units of the Tower repertoire. There is so much more that the gifted Ducret can do with these excellent musicians.