By GLENN ASTARITA
October 13, 2011
Sign in to view read count 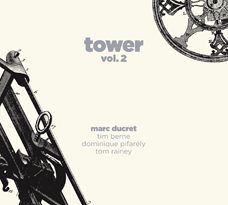 Marc Ducret is among the elite group of modern era guitarists who make a significant imprint on roads previously navigated, with a penchant for exploring bewildering musical vistas. His unique instrumental voice has been a source of wonderment for several decades. On his follow-up to Tower Vol. 1 (Ayler, 2011), featuring a horns-based quintet, Ducret realigns with longtime comrades and influential musicians in their own right—alto saxophonist Tim Berne and drummer Tom Rainey—for a bass-less quartet. Moreover, violinist Dominique Pifarely's synchronous dialogues with the soloists reemphasize an organic element amid the experimental side the artists bring to the forefront.

The band kicks off the set with an impression of unsettled calm on the opener, "Sur l'Electricite." But Pifarely's dark and droning motifs, and a sensibility that bespeaks dour circumstances, don't last for long as the musicians get out of neutral, notching it up with scorching exchanges and unanticipated diversions. The musicians engage in scrappy dialogues and multifarious improvisational segments, where Berne and Ducret contrast, shred, and coalesce via oscillating unison choruses, atop Rainey's punchy, polyrhythmic beats.

With simmering interplay, the ensemble shapes the dynamic into variable flavors and rhythmic exercises while using counterpoint mechanisms throughout; a many-sided viewpoint, including cosmic burnouts and maddening unison lines, executed within a linear maze of sharp turns and passageways leading to dead ends. Pifarely's stinging staccato frameworks instill a budding or interweaving accent to the sum of the geometrically moving parts. Add several whirling dervish-like movements and odd-metered pulses, and the band's mind-bending, episodic succession of developments yields the archetypal knockout blow. A choice pick for 2011.