Sun Ra: Toward The Stars 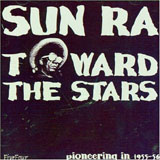 The bandleader, keyboard player and composer christened Herman Blount made his reputation under the name of Sun Ra, and this compilation of pieces from the early years of his career could almost be an exercise in confounding expectations at the same time as it amounts to a strong case for Ra and his recorded legacy.

In later years his band became a whole lot more than a band; never was the notion that the band that plays together stays together taken to a more logical conclusion, and the music here is in many respects a working definition of things to come. Beneath Ra's aptitude for creating verbal smokescreens there was an acutely well-informed musician and this is well exemplified here by "Can This Be Love," recorded in Ra's apartment in 1955 and featuring him at the piano in the sole company of bassist Wilbur Ware. The music is sublime, the work of two men so well-informed about the past that they could apply its lessons to the future.

Knowledge is not limited to the history of jazz, however. On "Lullaby For Realville" the prayer meeting is evoked in the opening bars before the horn voicings predate some of Charles Mingus' most enduring work by a few years. The comparison holds up also in terms of Richard Evans' bass work which is both propulsive and sure-footed.

As an orchestrator Ra, even at this stage of his career, had an aptitude for making an ensemble sound bigger than it actually was, and this is especially the case on "Demon's Lullaby." Tenor saxophonist John Gilmore, a man who spent a lot of his career as a Ra sideman, turns in the kind of solo which ensures his reputation is to this day preserved by those in the know.

"Piano Interlude" from 1955 is less than two minutes of Ra alone at the keyboard, and it finds him working through some of the measures he was applying to his work for groups at more or less the same time. It is as such an insight into his methodology for all of its brevity.

Ra's evident fondness for percussion workouts does, however, hamper some of the music here. "India" is a case in point, with the presence of tympani lending the music a melodramatically portentous air which is happily kept at bay for a time by Ra's downright pioneering work on electric piano; he might have been the only person using one in a jazz setting in 1956.

This is one of those sets where the historical significance sometimes outstrips the quality of the music on offer. Both issues ultimately balance out, though, in favor of the positive. Ra was undoubtedly a pioneer, and often the sound of musical experiments failing can be intrinsically compelling.

Spaceship Lullaby; Can This Be Love; Call For All Demons; Future; Sun Song; Lullaby For Realville; Urnack; Demon's Lullaby; Piano Interlude; India; Advice To Medics; Kingdom Of Not; El Is A Sound Of Joy; Dreams Come True.