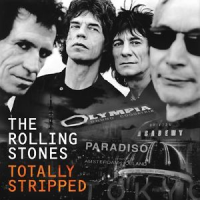 Eagle Rock's release of the Rolling Stones Totally Stripped is not another entry From the Vault but it may as well be because it's just as compelling and revelatory, if not more so, than Live at the Tokyo Dome 1990 (Eagle Vision,2015) or Hampton Coliseum Live in 1981) (Eagle Vision, 2014). The DVD/CD package in itself is a broad expansion of the content in the original titles as issued on video and audio, while the packaging boasts all the eye for detail a fan or technical savant might look for.

After an ever-so-brief intro explaining the stripped concept of the title-in this new form, at once a corollary to and expansion upon the unplugged approach popularized on MTV around the time of the Stones' 1995 Voodoo Lounge (Rolling Stones, 1994) tour-the ninety-minutes plus documentary leaps immediately into engrossing content. Alternating b&w footage (to mirror the acoustic simplicity of the music?) of the Stones playing in the studio with a rotating cycle of comments from the individual members on the various notions involved in the practical and conceptual aspects of what's just been shown illuminates the proceedings.

What becomes immediately apparent here is two-fold, like Totally Stripped in toto. Especially for latter day fans of the Stones and those musiclovers not wholly conversant in the group's early devotion to the blues, the musicianly aspect of this project arises from discerning observations offered by guitarists Keith Richards and Ronnie Wood about the decided difference in playing with acoustic vs electric guitars. But as its title implies, this content depicts not just rearrangements of familiar songs like Robert Johnson's "Love In Vain:" overall, it's an examination of the process of rediscovery on the part of some veteran musicians more accustomed to playing within a huge production than an understated and intimate context, within which, as vocalist Jagger notes, it's possible to play songs such as "Far Away Eyes" because such material simply will not translate to the huge open-air venues.

And that statement conveys its own palpable element of surprise: to hear Mick Jagger express uncertainty about the quality of his performances is as revelatory in its own way as seeing him sing (almost) wholly bereft of the histrionics he uses on a larger stage: no question he's aware of the cameras, but in a segment featuring him, Richards, keyboardist Chuck Leavell and background singer Bernard Fowler rehearsing "Tumbling Dice" around just a backstage piano, reminds what a great singer he remains (not to mention begging the question of whether he shortchanges that talent of his by running himself breathless on the larger stages).

The live performances here are further demonstration of the group's affinity for this music and, in turn, their respectful mutual affinity for each other as musicians. Leavell, once a member of The Allman Brothers Band in the post-Duane Allman era, proffers the theory the Stones 'don't have to do this,' a salient point further illustrated by scenes covering not just operations for selling tickets for the selected club dates, but also the setup of video projections outside the various venues like Amsterdam's 1500 seat Paradiso; as much as the Rolling Stones love what they're doing in this intimate frame of reference, they're also making a sincere effort to share that sensation with fans. It's a reciprocal warmth most obvious during the extended audience chant for drummer Charlie Watts near the end of the Dutch performance.

Much like the video, the CD included in this double disc package is almost completely retooled from previous release. Within these fourteen selections remains few of the same songs (though to what extent the booklet info isn't wholly clear), including an anthemic "Street Fighting Man" and a remarkably faithful cover of Bob Dylan's "Like A Rolling Stone" (complete with lighthearted self-effacing intro). And while the live recordings in these smaller venues, might seem to belie the title Totally Stripped because the electric guitars are often out in full force, on latter-day tunes such as "You Got Me Rockin.'" and "I Go Wild" (even Jagger's playing one!), the essence of the Rolling Stones as a powerful musical unit comes straight to the fore on these small stages.

As such, producer Don Was and recording engineer Ed Cherney's thoughts are most pertinent as they relate to how these shows proffer the band and its music in a wholly different light than the stadium presentations (though set designer Marc Fisher retains his responsibility for stage decoration, albeit on a much pared-down scale). Particularly in the segments devoted to the appearance in Paris, the immediacy inherent in the concert atmosphere is fully apparent in the sharply edited excerpts in the documentary (and no doubt fully captured in the larger package of Totally Stripped including three entire concerts, CD and book) as well as the aforementioned compact disc: the electricity is palpable as it erupts while a truly great rock and roll band plays at the top of its game.