By MARK CORROTO
February 24, 2009
Sign in to view read count 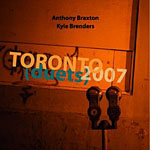 Fans of Braxton and his GTM surely will recognize the format. For the uninitiated, paraphrasing Supreme Court Justice Potter Stewart's characterization of pornography fits best: "I shall not attempt define it, and perhaps I could never succeed in intelligibly doing so. But I know it when I see it." Same with GTM, as explained by Braxton himself; it's music with no beginning and no end. And like a flowing river, it's impossible to step into the same GTM song twice (apologies to Heraclitus).

This trimmed GTM format cuts to the essence of the music. Braxton is joined by Canadian saxophonist Kyle Brenders, a student at Wesleyan University where Braxton teaches, who at times seems to be a cross between Evan Parker and Steve Lacy. Braxton and Brenders skate together through the composed themes, which can be both hypnotic and, at times, a source of vertigo. The tension accumulates when each accompanies the other or plays off the other's improvisation. Like other like-minded disciples of the Braxton system such as hornist Taylor Ho Bynum, guitarist Mary Halvorson, or saxophonist Steve Lehman, Brenders clearly has a bright future in music. The discipline and freedom within this system is quite impressive.

These two lengthy compositions are valued additions to the Ghost Trance Music mystique. The charm and allure of this music may be its defining of a sound with no beginning and, hopefully, no end.

Visit Anthony Braxton and Kyle Brenders on the web.