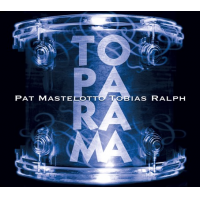 Like the rhythm of blood flowing through the heart; the drum is the rhythmic pulse of music. Drummers Pat Mastelotto and Tobias Ralph collaboration in ToPaRaMa is an adrenaline-charged project that includes the two on drum kits, splashes of electronic sound-design and contributions from talented guests. Mastelotto and Ralph's combined resumes contain a striking list of progressive rock artists that include Allan Holdsworth, King Crimson, and the Screaming Headless Torsos so it's a given that they rock the beat with an extreme level of proficiency. Nonetheless, there's a wealth of variety and ingenuity in a program which leans more on the side of experimental electronica.

Both musicians deliver a barrage of cadences, syncopated solos, and shifting rhythms. "NY5" is a peculiar groove that begins with intense drums threaded by a looped voice sample and shadowed by synthesizers, guitar and other instruments. While the music might resemble some bass-and-drum and dub sensibilities, the drummers switch up with "Sing Sang Sung" which resembles a drum-corp on steroids whereas "New 0" is downright funky bringing to mind the jazzy psychedelic hip-hop trance of the 1990's groups A Tribe Called Quest and The Pharcyde.

And speaking of the far-side, this music is out there. Want to travel to a planet in another galaxy? Then "Mama Will Bark" links tribal beats and terraforming soundscapes with a throbbing bass line and spacy synths and likewise "Up Heavy" where the drummers obliterate toms and snares against a canvas of alien painted hieroglyphics. Things come back down to earth in the "Bad Ass Van, Man" filled with humor filled spoken words. In the end, there's nothing more exciting than the syncopation of masterful percussionists creating beats in an unusual setting.