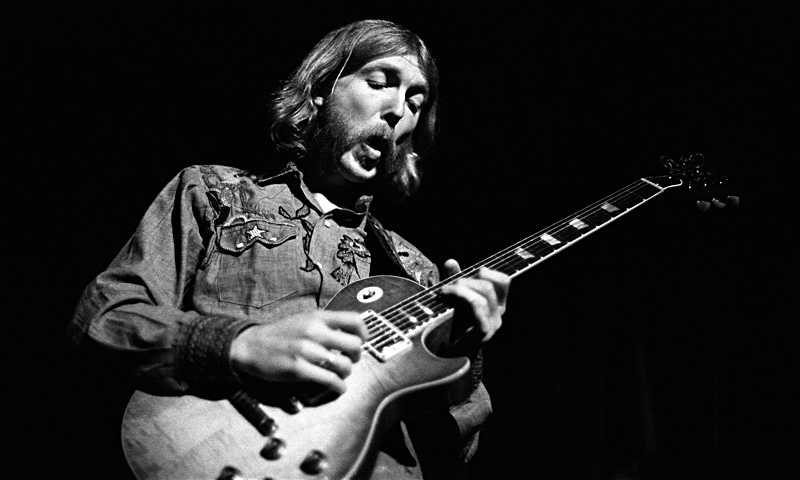 By ALAN BRYSON
December 3, 2015
Sign in to view read count
Ranking musicians is a hopelessly flawed endeavor. It's about as meaningful as having a list of the top ten best tasting foods. Taste is highly individualized, influenced by mood, familiarity, and the way in which multiple variables interact. One person's escargot is someone else's slice of Chicago style pizza. I just took a break and searched the web for the top ten best tasting foods, and of course CNN has tackled this difficult issue. Potato chips, Peking Duck, and buttered popcorn made their list, but sadly my grandmother's blackberry cobbler and cornbread baked in an iron skillet didn't. That's the nature of such lists, they're fun but certainly not definitive. My list below should been seen in that light.

To narrow it down, any guitarist who reached the age of fifty was excluded from consideration. That eliminated two of my personal favorites, Ronny Jordan and Hiram Bullock, who otherwise would have been on my list. Even with that I still couldn't find room for Robert Johnson, or Mike Bloomfield, another one of my all time favorite guitarists. The list is not intended as a ranking, my selections are simply arranged according to the age each guitarist reached.

His early recordings from the period 1966—1968 with the Allman Joys and the Hour Glass weren't particularly noteworthy. It was in 1969 as a session player in Muscle Shoals, Alabama that the unique talent of Duane Allman began to emerge. His recordings with Wilson Pickett, Boz Scaggs, King Curtis, Aretha Franklin, Clarence Carter and others captured the attention of recording stars and influential music insiders. This resulted in a label putting its trust and resources behind him, and giving him the freedom to form the Allman Brothers Band.

In an age of preening and prancing rock musicians with super star egos, Duane Allman established a musical brotherhood where the first commandment was to serve the music. Stand and deliver—with a workmanlike attitude and street clothes—that was the band's calling card. With them he recorded two studio albums, and At Fillmore East, a legendary double live album produced by Tom Dowd. Tragedy struck before the third studio album, Eat A Peach,was completed; as a result he only appears on three of its studio tracks. Fortunately there was a wealth of unused material from the live recordings at the Fillmore East, and Eat A Peach was released as a double album in order to include some of these treasures. These recordings, along with his collaborations with Eric Clapton represent a substantial share of a musical legacy he recorded in less than three years.

Not only did the band he founded survive over four decades after his death, but his influence and playing continue to inspire musicians and fans around the world. In terms of technical proficiency he might not have been the equal of some others on this list, but he was an extraordinary soloist. He had a unique and emotive musical soul, great sound and tone, and a fluid sense of time that took the audience on a spellbinding journey to other realms. Musically he was on fire during the final year of his life, remarking that his hands were finally catching up with his mind. He was a left-handed guitarist who played right-handed and revolutionized the sound and role of slide guitar in modern music—an innovator who left an indelible mark on the music world. Think back to the slide guitar prior to Duane Allman as you listen to this "Mountain Jam" solo.

2. Charlie Christian, age 25, died of tuberculosis in 1942 and was buried in an unmarked gave in Texas.

There have been a few inductees into the Rock and Roll Hall of Fame who seemed a bit of a stretch, but Charlie Christian certainly earned his spot. When you listen to Danny Cedrone's epic solo on "Rock Around the Clock" from way back in 1954, it sounds truly revolutionary. But if you then listen to a 1941 recording of Charlie Christian playing "Stompin' at the Savoy" at a small club thirteen years earlier, you begin to understand why he is such a towering figure among guitarists.

His career took off in 1939 when Benny Goodman hired him for his sextet. He was a true pioneer of the modern electric guitar. Jimmy Smith would later liberate the Hammond B3 from big chord solos by emulating the approach of horn players, but long before him Charlie Christian had done the same with the electric guitar playing single note solos.

It is particularly striking how contemporary Charlie Christian's sound and approach remain. His sound was not the low treble, somewhat muffled sound which was widespread among jazz guitarists in the 50s and 60s. I recall listening intently to one of his solos, forgetting that he was playing with Benny Goodman. It seemed so fresh, energetic, and lively, without a hint of nostalgia, and suddenly when the clarinet resurfaced it underscored just how revolutionary he was.

In a few brief years, without the opportunity to record professionally as a band leader, he made a tremendous impact on modern music and redefined the role of the electric guitar. Had his light not been extinguished so early, imagine how different the music we listen to today might be. Imagine if he had lived long enough collaborate with Charlie Parker or Miles Davis. Come to think of it, he would have only been in his early 50s when Jimi Hendrix made his American debut at the Monterey Pop Festival in 1967—Christian would have been seventeen years younger than Carlos Santana is today. With any luck, there will be a poster on the entrance of the pearly gates announcing a Charlie Christian concert.

3. Jimi Hendrix, age 27, died in London in 1970 of asphyxia related to an overdose of barbiturates.

The artist known as Jimi Hendrix was active from 1966 until his death in 1970. Prior to that time he worked often under the name Jimmy James as a session guitarist and supporting musician for several R&B acts. He was an electrifying performer who understood the power of showmanship, but he was also a uniquely gifted guitarist, a cutting edge audio innovator, and a perfectionist and wizard in the studio.

What's left to share about Jimi Hendrix, one of the most iconic rock musicians who ever lived? Perhaps some jazz lovers aren't aware that Jimi Hendrix and Miles Davis jammed together on a few occasions at Davis' apartment, and had planned to record together. But it gets even more interesting. At the Hard Rock Cafe in Prague there is a telegram on display from Jimi Hendrix to Paul McCartney, sent to Apple Records on October 21, 1969 which reads:

"We are recording an LP together this weekend in NewYork. How about coming in to play bass. call Alvan Douglas 212-5812212. Peace Jimi Hendrix Miles Davis Tony Williams." It's doubtful that McCartney received the telegram as he was on vacation, but talk about a super-group.

Miles Davis also wrote in his memoir that at the time of Hendrix's death, he and Gil Evans were in Europe planning a recording session with Hendrix. The mind reels at what might have been.

Here is Jimi Hendrix's cover of Bob Dylan's "All Along the Watchtower"—an extraordinary achievement. Hendrix spent six months overdubbing and substituting tracks trying to get the perfect sound. Proving that necessity is the mother of invention, after trying everything in sight, he used to lighter to get the slide sound he was hearing in his head. The web has a wealth of information and audio outtakes from this song, but be warned, you may get lost in a cyber rabbit hole.

Like many bluesmen before him, Sam Maghett, who performed as "Magic Sam," left his home in Grenada, Mississippi for Chicago, Illinois. He was only 19 years old when he arrived in Chicago in 1956. Soon thereafter he was signed by Corba Records. A brief stint in the army and a six month prison sentence for desertion interrupted his musical career. By 1963 he had a single that was getting play, and he was touring in the US and Europe. Eventually he signed with the Delmark label and recorded an album in 1967 and another in 1968. Despite more than a decade of paying his dues, Sam did not really break out—at least not in a way that matched to his talent.

Talent is important to success, but it also requires is a certain degree of serendipity. There is a Zeitgeist, or a cultural climate of an era, and to be successful your talent and artistic voice need to be in sync with it. In rare cases, an artist or group of artists influence the Zeitgeist. The Beatles are an obvious example. Nonetheless, there is more to it than talent and a confluence of the right people being at the right place at the right time. The Beatles were famously turned down by several labels before George Martin took them on. What if Columbia or Phillips had signed them, stripped them of their originality, and there had been no George Martin producing them? Or what about the Beatles without Brian Epstein, would they even have gotten a contract in the first place?

In any case, in 1969 Magic Sam was at the right place at the right time. That year he appeared at the first Ann Arbor Blues Festival with many of the biggest stars on the blues scene: B.B. King, Muddy Waters, Howlin' Wolf, Otis Rush, Magic Sam, Freddie King, T-Bone Walker, Lightnin' Hopkins, and Big Mama Thorton—and bookers took notice. On YouTube you can find some of his live club recordings from 1969. To my ears he sounds like he was perfectly in sync with the spirit of the times. His career was ready for take off, but tragically he died on December 1, 1969.

Stevie Ray Vaughan was a witches brew of talent, creativity, intensity, and showmanship. He also had a gift of being able to internalize the essence of other great artists without copying them. For example, you can clearly hear the influence of Albert King and Jimi Hendrix in his playing, but at the same time he was unmistakably Stevie Ray Vaughan, and in that there is genius.

There were few who could take the stage with Jimi Hendrix or follow him on stage. In a BBC documentary Jack Bruce recalled when Hendrix audaciously asked to sit in with Cream during a London concert and blew Eric Clapton out of the water. Bruce said Eric was a great guitarist, but Hendrix was a force of nature. In his biography Clapton essentially confirms the story, and states that he, along with the audience, was gobsmacked by Hendrix. Had Hendrix been alive in the 80s, it seems likely to me that Stevie Ray Vaughan would have tried to sit in with him. 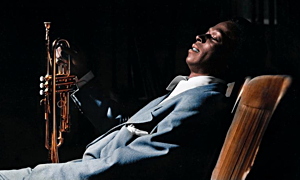 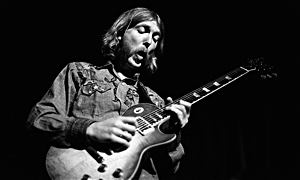 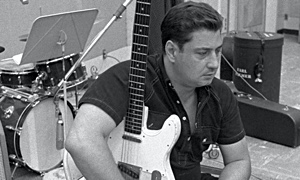 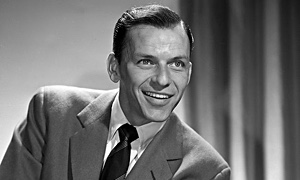