Nick La Riviere: Too Much To Do 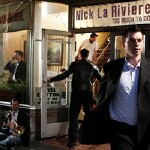 The warmth of the trombone as a brass instrument is astounding. Masters of the instrument such as Roswell Rudd, Slide Hampton, Steve Turre, Ray Anderson and Papo Vazquez give this wondrous instrument a near-human voice using smears and growls, groans and sighs. Canada is suddenly becoming a breeding ground for fine young instrumentalists who are adding to the instrument's language and literature: Torontonian Christian Overton, who leads the Composers' Collective Big Band; Montreal's Jean Nicholas Trottier, who fronts an amazing, edgy quartet; and now this virtuoso from Victoria, B.C., Nick La Riviere.

On his debut record, Too Much to Do, La Riviere negotiates his own challenging music with passion and noble grace. He also does a fine restaging of a Chick Corea/Neville Potter original, "Sea Journey," on which he takes a leaf from Steve Turre's book to play the stirring melody on conch shells. This is a wonderful surprise and a well-contoured melodic excursion. Clifford Brown "Joy Spring" is played a tad slower than its original boppish pace, but is emphatically joyful nevertheless. And the Antonio Carlos Jobim/Vinicius De Moraes classic "Agua de Beber" appears simply made for La Riviere's gently curving bossa nova sashay.

ADVERTISEMENT
La Riviere makes the record memorable by arranging all the music to feature strings: two violins and a cello. Jodi Proznick plays acoustic bass with characteristic splendor. She is never heard con arco (bowing), which appears to be a missed opportunity. Proznick is a fine bassist who, together with Canada's Brandi Disterheft and the American Esperanza Spaulding, forms a triumvirate of authoritative new voices on the bass violin, an instrument of immense possibility. The arrangements turn the harmonic excursions of each of the songs into a richly colored palette of passion.

"Inspiration" locks in on a deeply moving groove and grinds on spectacularly. Proznick is particularly strong here as La Riviere and the strings play across each other with contrapuntal grace and fire. "The Streets" is a beautifully crafted piece that undulates with surprise. It comes in the wake of "Sea Journey," which is awash with its own rhythmic waves of sound. "It Never Entered My Mind," not surprisingly a trombonist's dream song, is never stolid but a rather elegiac rendition of the standard. And happily, "This is It" and "Too Much to Do" feature a humorous side to La Riviere that is worth noting, as is his eminent lyricism, something that has endeared him to musicians wherever music is sounded in the jazz idiom.

Too Much to Do sets the bar rather high for Nick La Riviere. Nevertheless, judging by Too Much to Do, it is a done deal that he will leap even higher.

Inspiration; Weaver of Dreams; Agua de Beber; Joy Spring; Sea Journey; The Streets; It Never Entered My Mind; This is It; Too Much to Do.