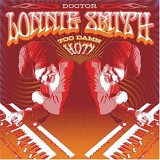 The general popularity of the Hammond organ may rise and fall (and given the fads of the day, its peaks and valleys can be remarkably extreme), Dr. Lonnie Smith stands by it like an old friend. Or sits in front of it, as the case may be if you're lucky. Since his early days in the '60s with George Benson, Smith's gone on to make plenty of records with big stars and otherwise, and he's always brought a sense of warmth and discovery to the stage. Last year's Boogaloo to Beck was a misstep of sorts; it would have taken a much more experimental approach to really introduce the organ properly into the oddly idiosyncratic music of pop star Beck [Hansen]. Never mind; Smith's back with a classic sound, and it remains as fresh and fun as his legendary work from decades ago.

Too Damn Hot! is Smith's debut on Palmetto Records, a label known for crisp, inventive modern jazz. He's joined by guitarists Peter Bernstein (lead) and Rodney Jones (rhythm), and drummers Greg Hutchinson and Fukushi Tainaka play on five of ten tracks apiece. There's no doubt at any time that this is a jazz project, despite the lingering and persistent appearance of the backbeat throughout the record. By making a point of including funk and soul flavors, Smith has kept the windows of possibility open, but at no point does he throw away bop inclination, articulate improvisation, and a constant give-and-take counterpoint between rhythmic and melodic elements.

The title of the record indicates a certain excess of heat that characterizes only a few of these tunes. The urgently flying closer, "Evil Turn," certainly boils the handles off the pots, but it's counterbalanced by other flavors: loosely sashaying funk-blues ("Norleans"), a hand-clapping anthem ("Back Track"), dreamy wanderlust ("Silver Serenade"), and triplet swing ("Someday My Prince Will Come"). When Smith gets wacky on the singsong "Your Mama's Got a Complex" (the only tune with vocals, of the jam-session chant variety), it works; when he takes things into more classic territory on "The Whip," he and especially guitarist Peter Bernstein reveal that they know how to inject needed energy into the groove.

Experienced listeners may (rightly) suspect yet another another retro funk-blues-soul-jazz effort of the superficial, blasé type that's become all too familiar. Rest assured that these players know how to keep it tight, solo convincingly, and always (this is the key) keep the ball rolling forward. Too Damn Hot! is an intelligent record that, whether playful or serious, keeps things moving along.

Norleans; Too Damn Hot; Black Track; The Whip; Silver Serenade; Track 9; One Cylinder; SOmeday My Prince Will Come; Your Mama's Got a Complex; Evil Turn