Tony Grey: Stepping out of the Shadows

I think composition is the way to find yourself and your voice. Out of nothing, you have to create something, and I think you learn a lot about your instrument and how to play your instrument--soloing and all the rest of it--just by composing.

Since graduating from Berklee with honors in 2001, Tony Grey has earned a reputation as one of the most exciting bassists of his generation. His debut solo recording ...Moving (Self Produced, 2004) won enthusiastic reviews and revealed a musician gifted with a very strong sense of melody, and songwriting skills which drew from influences far beyond the parameters of jazz.

As one third of pianist Hiromi Uehara's electrifying trio, Grey has played all over the world to great critical acclaim, and has also found time to play and record with the likes of John McLaughlin, Wayne Shorter, Herbie Hancock, Zakir Hussain and Branford Marsalis.

Now, with his second solo album, Chasing Shadows (Abstract Logix, 2008), Tony Grey is beginning to step out of the shadows and forge an identity as a leader in his own right. This album combines wonderful musicianship with the melodies and harmonies of a real tunesmith. The release of an instructional book for students of bass guitar (something of a lifetime's project) as well as a DVD will, no doubt, reveal some of the thinking behind a technique and playing philosophy which places Grey at the forefront of bass players today.

All About Jazz: Do you have a lot of time to listen to other music for pleasure or are you very much immersed in making your own music?

AAJ: Was there any particular music that inspired you in the making of Chasing Shadows?

This time I wanted to be more melodic, more grounded compositionally, and have a particular sound throughout the whole record that was gearing towards a larger audience. I just wanted to reach out to as many people as I could and introduce them to what I do.

AAJ: It's certainly a very melodic album, beautifully so; melody is something which is obviously very important for you, isn't it?

TG: Yeah, I love melodies; one of my biggest influences is [composer/pianist] Burt Bacharach. I don't think I've ever sat down and listened to one of his records, but hearing his music just once on the radio or on TV or in a shopping mall or wherever, the melodies always stick in my head.

When I thought about it I was blown away because I don't own any of his records, but I know a lot of his melodies. I just wanted to create something that was memorable where it would be in people's heads even if they weren't listening to it or hadn't heard it for a while. Because that's what really touches me—things that stay with me.

AAJ: Between your first album and this one, it has been about four years. Was that a long four years for you?

TG: The time goes really quickly. In a perfect world, I'd love to be able to do a record a year. A lot of artists who are signed to a big label and have a lot of support can put out a record every year and it's no problem for them. There's a huge gap in my music because I'm not really devoted to my own music; I don't have the time or the money to do it.

AAJ: You've been touring and recording so much as one third of Hiromi's trio that I wonder if this makes it difficult for you to pursue your own music more thoroughly?

TG: Yeah, it does. It makes it really hard because I have to practice her music when she writes it, and then we go on the road, and it's kind of too exhausting touring all the time to do any other kind of music. Then when we get time off, maybe she'll give us some other music to work on so I've been totally absorbed in it and haven't really had a chance to do anything else.

I am grateful and I love it, but now I'm more aware that I want to be more active and start to do my own gigs—start my own career and be a bit more serious about it. So I'm trying to write as much as possible on the road. I used to practice on the road, but now I don't practice at all, I just compose.

AAJ: Does this difficulty in making your own career explain the title of your CD, Chasing Shadows, or is there something else behind that?

TG: Throughout my life I've always had dreams and thought that if I get to do this or get the opportunity to play with that person, then I'll have made it or have arrived at where I always wanted to be. But every time I've achieved something I wanted to do, my goals have always changed. I think that's true of any artist or anybody in life—the dreams are always bigger than the catch. It isn't always what it seems to be when you get there.

I thought being on the road and having a record deal would make you comfortable in your life, allow you to do whatever you wanted to do, but that was not what it was really like for me. I feel like you're always chasing these dreams but actually they don't really exist.

All I've ever wanted to do was just play music and be comfortable and not have to worry about the hunt for it, but it's impossible. I don't think it's a realistic dream. I think the goal is to enjoy your life and just be happy with what you've got, and I just found I was chasing shadows for many years.

AAJ: Have you played any gigs to promote your album?

TG: I had a few gigs in the US and I did a week in Japan and about a week of festivals in Slovakia, and I've done a bunch of clinics to promote it—not as much as I would have liked to. I was always scared to do my own music; even when I was at school, I never put together my own band even though I was writing a lot. I was one of those people who always thought what I was doing wasn't that good, and I didn't want to impose on people because I was kind of shy.

I got myself into a situation where I was offered a good gig. I accepted it and then was freaking out whether I'd be able to pull it off or not. But I got a good reaction and a taste for it. I'm starting to record music for my next record and I really want to make that my priority.

AAJ: What musicians were you using for the live gigs?

TG: I had two groups—I had a quintet with (trumpeter) Elliot Mason and (trombonist) Brad Mason. Elliot was on Chasing Shadows. He plays with Wynton Marsalis and Brad plays with John Mayer. They are great musicians. I was using Obed Calvaire on drums, who has played with Richard Bona and who's very active around New York. I had pianist Oli Rockberger, and that was my quintet.

Then I got offered a gig but they requested a quartet and I got Gregoire Maret the harmonica player and did a bunch of gigs with him. His sound really fit my music. So for any gigs I get now, I'm going to use Greg Maret, Obed, and a new pianist called Romain Collin who played on my first record. We're starting to do more stuff together now; he's more into electronica and is really versatile.

AAJ: So the musicians you were using for live gigs were pretty much the line-up on Chasing Shadows. That must have been quite nice to have those same musicians playing live with you.

TG: Oh, it was great because they have always been my favorite musicians. These guys have emerged as some of the top young jazz musicians in the world today. My goal was to use young guys who inspire me and who I've been hanging around with. To have the opportunity to play with them live was a dream come true. The music really developed live and totally changed. It was really cool to see how it was played live, actually.

AAJ: In what way did it change when it was performed live?

TG: Everything just kind of really opened up. We did some reharmonization of the melodies and I just let everybody do their thing. The musicianship is really strong and I feel that they all have a really strong sense of who they are as musicians. I didn't want to inhibit anyone in any way, so when we were rehearsing I just kept all the sections really open and just let everybody away and develop the sound with it. It was less of a thing where there's a solo and then a solo—there's no one really soloing. Everyone is following everyone else and we just see who wants to take the lead or who wants to drop out, just to see where it goes. 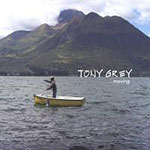 AAJ: So a kind of Joe Zawinul-type philosophy.

TG: Yeah, and sometimes we'd end up playing in a duo or a trio, or someone would play solo. It was really open you know, and if the melodies were strong then we could just lead into a melodic section and take it wherever it would go. It was really nice, man.

AAJ: In Chasing Shadows, pianist Oli Rockberger's sound is quite an important feature of the album and he has a lovely melodic sound. You've played with him for a long time, haven't you?

TG: We've been good friends all the way through Berklee. I was playing in his band and he was doing my thing. The only problem is because we know each other so well, and we know each other's playing so well, it's easy to fall into a trap of being safe.

You know, if you're on stage you can think, "It's not broken, so don't fix it." But that's something that we were both very aware of and we were trying different ways of inspiring each other and bringing in musicians like Gregoire (Maret) and Elliot (Mason) and just trying to mix it up. It was good, man. It was definitely a very self-realizing experience.

TG: You know it's interesting , you can do a songwriting major in Berklee, though I don't know much about it, as my major was performance so I was just studying my instrument. But it's interesting what you say because, looking back on it, even my first teacher back in England advised me, "Whatever you do, try and write your own music because at the end of the day that's what you have—that's yours, your voice." But when I went to Berklee, I mean, throughout my four years, nobody ever encouraged me to write a piece of music.