Tony Bennett: On Tour at 85

By NICK CATALANO
November 18, 2011
Sign in to view read count 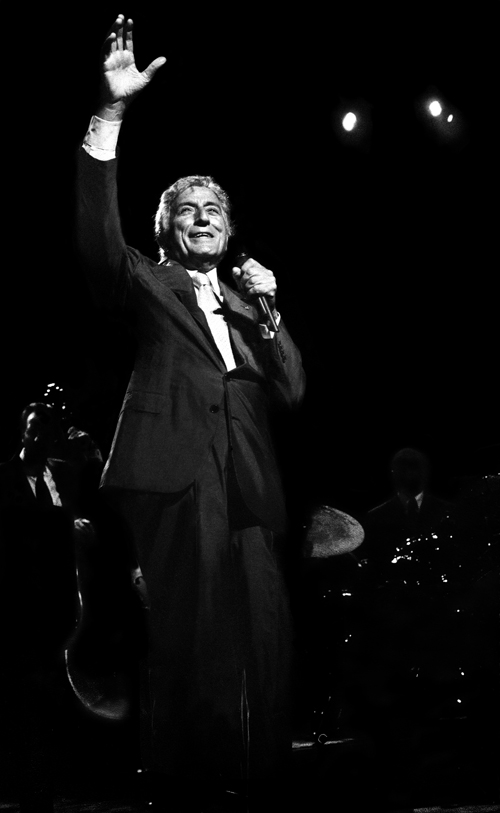 Last weekend my myriad travels took me to Pittsburgh, where I was able to visit Heinz Hall to watch Tony Bennett defy nature and astound a packed house with his latest concert wizardry. Heinz Hall sits in the middle of a revitalized downtown Pittsburgh and has been wondrously restored, with gold-leafed columns, plush red carpeting and chic dining facilities. Years ago, Lena Horne insisted that Bennett include the venerable venue on his tours to experience its amazing acoustics. This time around Bennett celebrated the concert hall's legendary sound quality by turning the microphones off in a clever bit of showmanship and singing an a capella gem.

Bennett's performing defies credulity. His total command of an arsenal of vocal pyrotechnics developed over a 60-year career has no parallel in the pop genre. Decades ago, when Columbia records curtailed his high-budget sessions featuring Torrie Zito's masterful orchestral arrangements of hit after hit, Bennett implemented new singing strategies. He began touring with piano trios (Ralph Sharon was a long-time accompanist) and recorded innovative jazz sides with Bill Evans. During these years he developed recitativo spurts, re-melodized sequences and dramatic body language to replace the whole-noted languor of Zito's lush string support. These new approaches provided replacement for future lapses in breath sustenance and other age-related issues. Little did he realize that these midcourse corrections would sustain him far into the future, and allow him to wow audiences with his octogenarian alchemy.

On this fall 2011 tour, Bennett has assembled a coterie of superb musicians, led by wunderkind pianist/arranger Lee Musiker. As the cavalcade of the 60-year hit list wound its way through the upbeat evening in Pittsburgh, even the most attentive fans found a continuous showcase of fresh vocal wares. A surprising intervallic leap here, a stop-time sequence there, and a flourish of ingenuous patter throughout combined to make the audience roar with approval.

At Heinz Hall, Bennett collated his songs from the long list of hits recorded throughout his vast career, including "The Shadow of your Smile," Maybe This Time," "Embraceable You," "San Francisco," "Old Friend" ( performed with his daughter Antonia) and many others. When he segued from tune-to-tune, there were sighs of recognition from some audience members, though most in the house didn't actually recognize the biggest hits; too young, but clearly thrilled, their idolatrous bravos and continual standing ovations were a testament to Bennett's aesthetic longevity.

Perhaps the most amazing feature of the evening was Bennett singing with Musiker or guitarist Gray Sargent alone. With nowhere to hide—the big orchestras of yore from his early Columbia days gone—the singer was virtually naked on the large Heinz Hall stage, which only served to highlight his stupendous talent even more.