Tony Bennett at the NYCB Theatre at Westbury 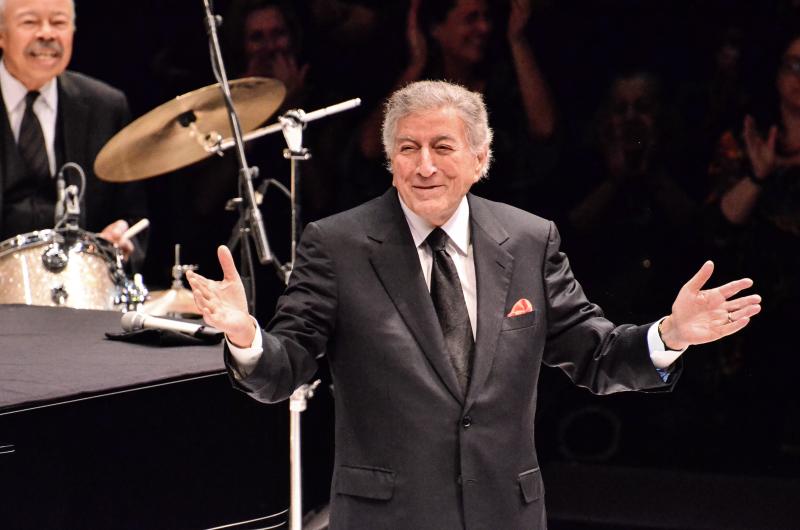 At 89-years of age, Tony Bennett has seen and done it all. He also is the owner of one of the most distinctive voices in all of music. In fact, it has been documented that Frank Sinatra said, "For my money, Tony Bennett is the best singer in the business. He excites me when I watch him. He moves me. He's the singer who gets across what the composer has in mind, and probably a little more."

Born Anthony Dominick Benedetto on August 3, 1926 in Astoria, New York his father John was a grocer and his mother Anna was a seamstress. His Uncle Dick was a Vaudeville performer, and as such Bennett had an early "in" into show business. When he was 13, Benedetto began performing as a singing waiter in a number of Italian restaurants near his Astoria, Queens home. During his high school years, Benedetto studied painting and music at the School of Industrial Art until he was forced to drop-out to help support his family. He worked a number of low-paying and menial jobs while trying to become a professional singer. He continued to work as a singing waiter and sang at a nightclub in New Jersey.

World War II beckoned, and Benedetto was drafted in November 1944, temporarily derailing is ambitions. Following the end of the hostilities, Benedetto stayed in Germany as a member of the occupying forces. He was assigned to a Special Services band that entertained the American troops in Germany. Eventually, he hooked up with the 314th Army Special Services Band singing under the stage name Joe Bari.

After his discharge, Benedetto studied at the American Theatre Wing on the G.I. Bill and continued to perform wherever and whenever possible. Under the Joe Bari moniker he released a few singles for Leslie Records. They did not sell well.

Pearl Bailey gave him his big break. Bailey asked Benedetto to open for her when she played in Greenwich Village. Bob Hope was in attendance and he soon brought Benedetto on the road with him and changed his name to Tony Bennett. In 1950, Bennett cut a demo of "Boulevard of Broken Dreams" and was signed to Columbia Records (by Mitch Miller) and the rest is history. Over the course of his long career, Bennett has won 18 Grammy Awards, two Emmy Awards, was named an NEA Jazz Master and has been named a Kennedy Center Honoree. He has sold more than 50 million records.

On a warm and pleasant night in what is essentially his backyard, Bennett and his band appeared at the NYCB Theatre at Westbury. The mostly older-aged crowd, on the first of a two-night engagement, was sprinkled with a few younger Baby Boomers, a small number of Generation Xers and a precocious 3-year-old who came with her grandparents.

The evening began with a short, but pleasant six-song set by Antonia Bennett who was opening for her father. The fifteen-to-twenty minute set featured excellent versions of the standards "Teach Me Tonight" and "Taking A Chance On Love." Other highlights of the 30-something-year-old's set included Noel Coward's "Sail Away" and "Always On My Mind."

Following a recorded (and from the grave) announcement by Frank Sinatra that stated, "Tony's gonna come on now and he's gonna tear the seats out of the place for ya, because he's my man, this cat. I said it publicly in the paper and I'm gonna say it again, he's the greatest thing in the world today, this man, Mr. Tony Bennett!," Bennett appeared and received the first of many of the evening's standing ovations (this one before he even sang a note).

The spry octogenarian was in great spirits and in fantastic voice as he offered the crowd a performance filled with exactly what they wanted. His set list was packed with some of the greatest standards ever recorded including "I Got Rhythm," "Steppin' Out," Ira and George Gershwin's "Our Love Is Here To Stay," "The Way You Look Tonight" and "But Beautiful."

Other highlights included: "How Do You Keep The Music Playing?" "The Good Life" (after which a woman yelled, "You're still the best. Tony"), the "Rags To Riches"/"Cold Cold Heart"/"Stranger In Paradise" medley, "In My Solitude" (which Bennett introduced as "a great song written by Duke Ellington."), "The Way You Look Tonight" and the swinging "Sing You Sinners."

Bennett and his daughter enthralled the crowd when Antonia returned to the stage to duet and dance with her dad on Stephen Sondheim's "Old Friend." The soft-shoe routine that they did was quite lovely and charming. Late in the set Bennett introduced "Boulevard of Broken Dreams" as the very first song I ever recorded," and the audience lost its collective mind and leapt to its feet.

As the evening wound down, Bennett thrilled the Westbury crowd with a stellar version of "The Shadow Of Your Smile," a fantastic reading of Sinatra's "One For My Baby" (which he introduced with a simple tribute to the Chairman of The Board when he said, "The entertainment Industry is celebrating the great Frank Sinatra's 100th birthday. Here's one he made famous, written by Johnny Mercer.") and "For Once In My Life" (which received a standing ovation).

Prior to "I'm Old Fashioned" Bennett asked, "Should we keep going?" The audience cheered its approval and Bennett gave it his all. The main set ended with Bennett delivering a stunning version of his signature song, "I Left My Heart In San Francisco." Though he was born on this coast, his New York audience didn't hold it against him, giving the singer another standing ovation.

Though he never left the stage, Bennett's encores were signified when he announced that, "We'd like to keep going tonight." The three-song encore set featured "Who Cares," a beautiful version of "Smile" (of which Bennett said that its composer, Charlie Chaplin, wholeheartedly approved of and loved. Chaplin, he said, wrote him a letter thanking him for reviving the song back when he recorded it in the '50s.) and "When You're Smiling."

When the performance ended, the audience, young and old, leapt to its feet (again) and gave the great singer the adulation he most certainly deserved.