By WOODROW WILKINS
February 12, 2009
Sign in to view read count 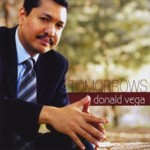 Pianist Donald Vega wastes no time warming up on his debut, Tomorrows. The opening track, aptly titled "Wake Up!," gets things going right away.

Vega won Down Beat Magazine's 2007 jazz Student Soloist Award and first place at the University of West Florida's Philips Jazz Piano Competition in 2008. He studies at the renowned Julliard School of Music with piano great Kenny Barron. Accompanying him on his debut release as a leader are Lewis Nash on drums and David J. Grossman on bass.

"Wake Up!" is one of six Vega originals. This energetic piece is cued by Nash's introductory roll, with Vega carrying the melody, but Nash and Grossman adding their significant, but at times subtle, touches. The lively beat makes for good listening, but is also danceable. As if the song isn't attention-getting enough, the call-and-response between Vega and Nash, beginning around the 2:50 mark, makes the ears perk up.

The trio's take on Charlie Haden's "Our Spanish Love Song" is delightful. Nash chips in some mellow touches on the toms, and Grossman performs a soft bass solo. The pair does a fine job of mixing things up underneath Vega's lead.

Another Vega original, "The Will to Nurture," is a moving yet easygoing selection. The sound not only inspires thoughts of family but also evokes a pleasant drive through the country. Grossman and Nash continue their mastery of strong but not overpowering play in the background. And there are times when all three musicians are equal partners, in terms of emphasis.

The trio is a solid unit throughout, even when joined for one song by guest vocalist Maria Neckam. Whether performing covers or his own compositions, Vega quickly establishes himself as a pianist in the classic jazz tradition.