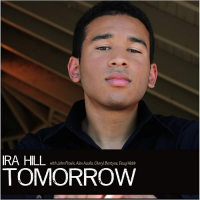 Ira Hill. Remember that name, for you're likely to see it in print a lot more in the future. While this up-and-comer was still in his late teens when this album was recorded and released, you'd never know that from a blind listen. His debonair delivery, sure-voiced scatting, and all-around taste belie his years. And the cherry on top is his welterweight soulfulness, a unique quality that counters the notion that truly fervent feelings can only be found in the huskiest of male voices. Tie all of that together and you start to realize what a find Hill really is.

Tomorrow is a journey through various moods and modes of expression. There are genteel offerings, animated performances, downcast tones, and jubilant displays, all of which help to touch on Hill's versatility. One number may highlight his sly charm ("Afro Blue"), another might deal with his ebullient delivery ("Cloudburst"), a third may focus on wistful feelings and pensive shades ("Minuano"), and a forth could be all about bop chops ("Billie's Bounce"). But there are some qualities attached to Hill that come to the fore during every performance: He has a firm rhythmic presence, he understands how to imbue a lyric with the proper sentiments and a dose of personalization, and he operates as part of the band, not an entity apart. On one or two occasions things fall a bit flat on the emotional spectrum ("Estate"), but it's a rare exception. All in all, Hill really has his art together.

The other musicians featured here—the core trio of pianist John Proulx, bassist Kevin Axt, and drummer Dave Tull; notable guests, including percussionist Alex Acuña and saxophonist Doug Webb; and vocalist Cheryl Bentyne, who can be credited for guiding Hill, nurturing his talents, and getting him into the studio—help to accentuate different qualities hidden within Hill while also making important contributions of their own. Calling them support players would do a disservice to their work, as they're really the architects who build the rooms and houses that Hill's voice resides and thrives in.

Ira Hill truly has his whole life ahead of him, but he already has one solid release behind him in the form of Tomorrow. It's a fine debut album that touches on today in so many ways.