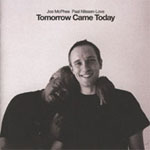 Music and talking are two modes of expression rooted in human communication. Most of the time, the audible distinction is clear. Sounds are sounds and words are words: the medium makes no difference in how one hears the instrumentality of either. In the context of improvisation, reed player Joe McPhee and drummer Paal Nilssen-Love challenge the definition of both music and talking on Tomorrow Came Today by forcefully transforming the inflections of one into the other. There is no talking...only the simplicity of its musical equivalent.

Everything McPhee does qualifies as poetry. That he makes sound poetry and includes the artistry of other musicians allows him to replenish his palette of sonic choices. Nilssen-Love, one of the few drummers with whom McPhee has recorded in the context of duet, extends significantly the possibilities of colors that McPhee can reveal with his tenor.

The sax begins with minimal tweets on the opening title track. This sparseness resembles a prolonged stuttering. The sporadic vibrations of the reed bring the horn into the same kind of sonorous discreteness that originates from the dry clicking stick work on the drums. Rhythm exploration is not the focus, matching timbre and personality of instrumentation is. The drum sound grows in power when Nilssen-Love chooses to use his hands as the tools for plowing into the musical concepts. By extending his tenor tones, McPhee resets the mode for speaking with a wise, questioning retrospect. He splits the tones, increases the fluidity and screams a bit within intervening high pitches. The drums pull back and are lighter, nonetheless omnipresent.

The drums and the horn respond to each other in tempo and language application ("Go"). If one player moves forward, then the other sits back to balance out the essence of the message ("Ibsen's Ghost"). McPhee can allow the drums to set the guiding principle that propound motivation and clarity. He develops the tenor's dialect in phases, letting the pocket trumpet help him settle within the stream of how to progress ("Ibsen's Ghost"). When the tenor finds full faculty in a substantively fervent depth of repeated tonal phrases or in split tones pressed through the reed with the strain of vocal chords behind them ("Build and Break," "Crossing Messages"), the drums open up as well with a relentless, yet non-overpowering steady motion ("Acts of Time").

The musicians strive to reach that place of uninterrupted resonance, found in striking a gong ("Sun and Steel"). Both the drums and the tenor ring with vibration, overtly engaging in a meditative surface. The music reaches a turning point from seeking its voice to using its voice, imbued with the tenor's expansion and contraction, ostinatos and circuitously discovered melody. The drum and cymbal figures vividly echo, imitate or strike a counterpoint with the horn ("Body Sound," "Crossing Messages").

That McPhee and Nilssen-Love never attempt to groove in an identifiable pulse transcends the expected roles of their instruments. Rather, the language of their music unfolds conversantly, with imaginative purpose apart from strict temporal regulation.