By DAN MCCLENAGHAN
March 15, 2005
Sign in to view read count 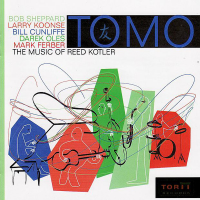 Five musicians are named on the disc's cover, but with Cunliffe sitting in the producer/arranger chair, you might call this group Bill Cunliffe and Friends.

The sound here is sleek and elegant, like a new sedan on a showroom floor or rolling smoothly on a freeway drive, flashing in the sunlight, cylinders humming in a smooth synchronization—that's how seamlessly the arrangements fit together; that's how Cunlffe shines up Kotler's classy songs.

Kotler's tunes remind me of some of the time-tested songsmith work of composers like Henry Mancini and Cole Porter: well-crafted melodies that flow effortlessly.

There's nothing groundbreaking on Tomo, just beautiful songs played with warmth and elegance by a cohesive group of musicians.

All My Love's For You, Sweet Suzannah, I Will Always Love You, Did I Ask You If You Knew(That I Love You)?, Someday, I Will Finder Her, In A Restful Place, On A Warm Summer Night, When I Look At You, Love's Such A Funny Thing, It's Been A While, Joyful Times, Waltz For Gary.