By DAVID RICKERT
January 19, 2006
Sign in to view read count 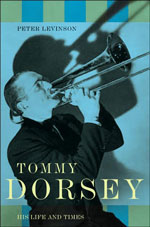 To the people who played with him, Tommy Dorsey was a real S.O.B. To millions of others, he was one of the greatest big band leaders, providing the soundtrack that led people out of uncertain times into a promising future, peeling off hit song after hit song. Those who know him best · the members of his orchestra · knew that it took the personality of the former to create the latter.

For such a big name in the Swing Era, Dorsey has received relatively short shrift in the biography department. Peter J. Levinson (author of a biography of another big band star, Harry James) has crafted a fine account of the man behind hits like "I'll Never Smile Again, "Marie, and "Song Of India.

Of course, Levinson has great material to work with. Dorsey was a legendary womanizer, a determined task master, and a temperamental figure on the bandstand, all of which coalesce into an interesting portrait. Of course we also get to see personalities like Frank Sinatra, Buddy Rich, and his brother Jimmy, all of whom faced Dorsey's wrath several times.

Most revealing are the passages that detail the life of a big band musician. Many of them abandoned their families out of dedication to the music and many turned to drink or drugs to keep up with the hectic schedule. Dorsey himself had many affairs and was an absent father. Also, Dorsey was not one to put up with segregation, and there are many examples of his unwillingness to let musicians like Charlie Shavers be treated poorly. The tales of life on the road provide a fascinating glimpse into this life through firsthand accounts of those who lived it.

What comes through loud and clear is that, despite how difficult Dorsey could be at times, his band members truly respected him and appreciated his dedication to music. No matter how many times they were fired and rehired, the first hand accounts from those who were in the band are a testament to his greatness.

Perhaps most telling are the final chapters, which detail the Dorsey Brothers' television show. Long gone were their glory days, yet they found new success in the new medium. One of their first guests was a young Elvis Presley at the cusp of fame; despite others' skepticism, Dorsey knew talent when he saw it. It's perhaps a bit ironic, then, that Presley was the one who helped put the nail in the coffin of the type of music Dorsey played.

Livin' In A Great Big Way is a fascinating read sure to please those who love big band music and jazz.