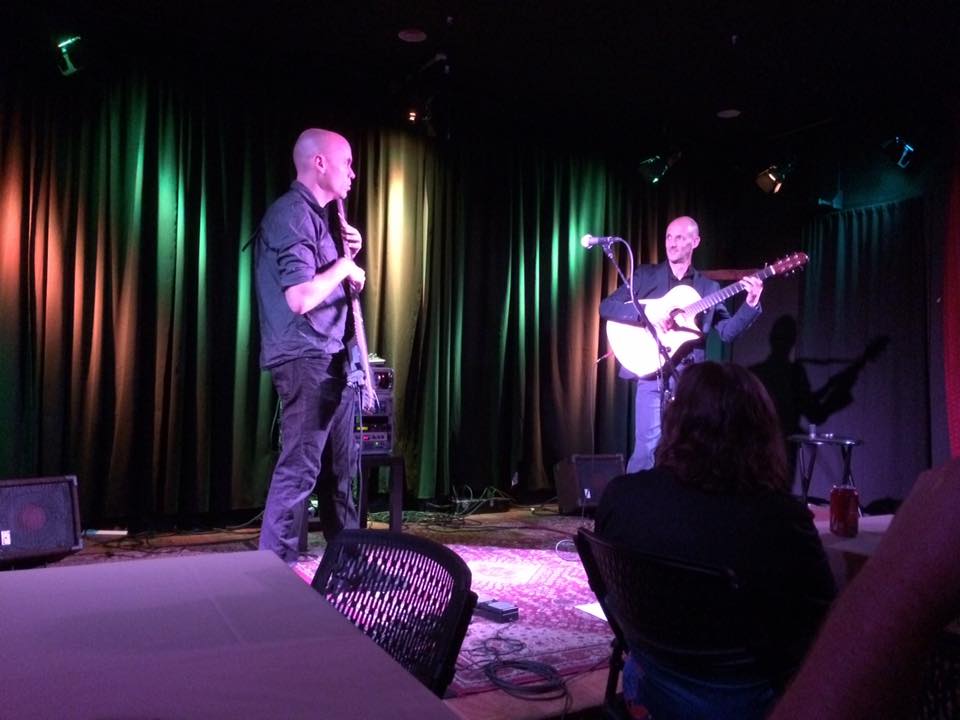 A good piece of music can paint a picture, evoke feelings, tell a story or possibly, in the right hands, do all those things together. This is certainly what happens when Chapman Stickist Tom Griesgraber meets up with guitarist Bert Lams (the stage—left member of the California Guitar Trio) in among their other respective gigs. They weave a sophisticated musical tapestry: old-world roots and modern technology, emotion and smarts, compositional intricacy and simple beauty. The pair also makes expert use of electronics and looping, which lets them either sound like a straightforward almost-acoustic duo or blend layers and effects the way a painter mixes colors.

The cozy café space of Kennett Flash may sit in a charming metropolitan suburb, but on this summer Saturday the pair transported us back to the 19th-century American frontier. The main set was drawn from their studio debut Unnamed Lands (ThosSounds, 2013), a concept piece that envisions the experience of a wagon-train convoy journeying from America's early colonies into the wilds. Lams is equally at home taking dignified flights on the guitar or adding electric grunge, while Griesgraber's fluid fret-dancing adds percussive flavor and vivid atmospherics as called for (often at the same time). The duo's distinctive style can seamlessly incorporate any of their influences from down-home Americana to classical or Celtic music. In any mode the results are always picturesque and wordlessly eloquent.

The program largely followed the album's narrative flow: starting with the loping optimism of "Don't Look Back," adding adventure and drama in moments like "War Dance" and the dynamic multi-part centerpiece "Prairie Suite," and eventually capping off the planned set with the lush tension-releasing washes of "Pacific."

Both took turns at the microphone in between to further elaborate on the background and inspiration for many of the pieces, also allowing Griesgraber to give a brief amusing tutorial about the Stick before they wrapped up with the epic-and- eerie "Victor's Chase." It added up to a quietly classy evening of harmonic delights. A performance by these two can serve as a course study on technique or a dazzling display of effortless interplay, but all the while (and more importantly) makes sure the virtuosity never overshadows the human heart underneath.