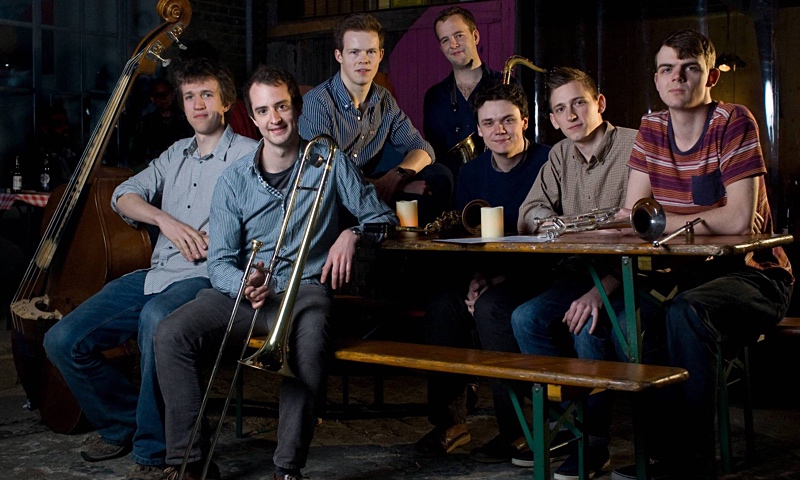 By NICK DAVIES
March 27, 2017
Sign in to view read count
Tom Green is a trombonist, composer and arranger described as "a new rising star in the British jazz scene" by Nigel Williams (Jazz FM). In 2014 he was mentioned three times as Jazzwise "One to Watch," and was the recipient of a Help Musicians UK Emerging Excellence award. He is a graduate of the Royal Academy of Music jazz course, and has performed at venues including Ronnie Scott's, the Vortex and 606 Club, as well as the Montreux, Toronto and Montreal Jazz Festivals. His current main project is the Tom Green Septet, who released their debut album Skyline in February 2015 to unanimous critical acclaim.

Tom discusses his career and how the different musical styles have influenced his playing and composing.

All About Jazz: You have been described as a new rising star of British Jazz, how does that sit with you?

Tom Green: It's always nice to be given that kind of respect, after working at something for such a long time with no feedback. You sit there, writing music on your own which you then rehearse with a band behind closed doors. When you put it out into the public domain, you get all these people that can hear it after what has been a long process, especially if you have been recording an album. This can take up to a period of nine months of writing and recording the music before you release it. It's great to have people enjoying the music and saying positive things about it. This makes it all worthwhile.

AAJ: Do you think it's unusual for a trombonist to be in the limelight?

TG: The instrument tends to be overlooked. When anyone thinks of their favourite jazz musicians it's always saxophone players, or trumpet players. I think the trombone gets pushed to one side. I don't know why that is, I think people are unsure of it because of the common belief that the trombone has more technical limitations than other instruments but that is not true. Also, it is played less for some reason and therefore there are not that many trombone players out there. It is because of this that it does not get in the limelight however I would like to see it rebranded with a higher profile. There are so many great trombonists around and so many great arrangers who are trombonists, such as Sammy Nestico and Bob Brookmeyer. This shows that there is a big tradition of arrangers who were trombonists throughout the history of Jazz.

AAJ: Did you start playing the trombone at school?

TG: Actually, I started on piano and I credit my piano teacher for introducing me to jazz. He was a massive fan of classic jazz and he got me improvising on the piano without me even realising it at quite a young age. When I picked up the trombone later it was a natural thing for me to start playing jazz and improvising. I was also taking classical lessons at the same time with a teacher and I used my piano playing to influence my trombone playing. In fact my first jazz gigs were on the piano and I slowly made the switch over. It was then that I discovered the lack of trombonists and I was in demand, especially for big bands.

AAJ: You are not the first person I have interviewed who started their career on the piano and moved across, why do you think that is?

TG: It's a good instrument, a harmonic basis for everything; you can see the harmony on the piano right in front of you when you are playing. It really gives you a good grounding of all the basics and then you can extend that to horns and single line instruments quite easily.

AAJ: Do you feel that, having studied classical music, gives you some discipline?

AAJ: What made you apply to the Royal Academy of Music. in London to study on the Postgraduate Jazz Course, becoming the first trombonist to do so?

TG: It's interesting because, at university, I did a physics degree but when I was there I discovered all these amazing musicians and got very involved in the university big band and this led me to directing it for a couple of years. We also managed to take this band on tour and played the Montreux Jazz Festival. as well as other places in Europe; this was great but you can only really do it at university because it's all on a shoe-string budget and nobody gets paid. Outside of university, it is more difficult to do without any funding. This experience made me think that I really want to do this full time and it was then that I applied for the post-graduate course at the Royal Academy and managed to get accepted.

AAJ: You studied under some big names such as Dave Douglas, Django Bates and Troyka; is that how you came to meet Troyka doing your post-graduate course?

TG: Yes, it was the first time I had met them. Chris Montague, Joshua Blackmore and Kit Downes had all graduated a couple of years ahead of me from the Academy but they were all still around due to the good alumni network. I had also met them within the scene and seen some Troyka gigs. Nick Smart, head of the course at the Academy, got together a big band with Troyka who were keen to write for one. I was part of that band for a one-off gig at the Academy and because Troyka really enjoyed that, they reformed it for the Cheltenham Jazz Festival. with a change in the line-up and I was really lucky to be part of that. A CD was also produced and the whole project was not only fun but a great experience.

AAJ: In 2014, you were mentioned three times in Magazine as one to watch and you were the recipient of the Helton Music UK Emerging Excellence Award. Is that an award you had to apply for?

TG: Yes, they have a scheme where musicians who have not released a record can apply for some money to do things to help them move their careers forward. I used the funding to start the process of getting my debut album produced and released and for the launch and supporting tour. I also secured funding from Jazz Services. I run a septet and the musicians in the band need paying; as does the tour logistics and transport, so it was great to have the funding in place. It also helped in recording the album properly, over three days, at Real World Studios which is owned by Peter Gabriel. This was a great experience: being able to go away and concentrate completely on the music and having the ability to record at any time, day or night.

AAJ: The musicians that play in the septet: are they accomplished players you have met during your career?

TG: They are all amazing composers and band leaders themselves and are ones to look out for in the future. I've known them all for a while and some since I started playing. James Davison (the trumpeter) and I grew up playing together and attending jam sessions in Cambridge so it's really great to have him in the band because we know each other really well. Most of the other musicians I've met at the Academy, or in London, and handpicked them. Lucky for me, they were all up for playing my music and being in the band. It all comes together really well.

AAJ: Does it help that you know the musicians so well when you are writing the pieces?

TG: Yes, definitely! I write with those people in mind. It's not all generic; I focus my writing on them as I know their sounds and how they play, what they like playing and what will sound good with them. I also know when and how to stretch them. I enjoy writing pieces things that will push them outside their comfort zone as often, that is when the best music is made. When people are on the edge of what they know and are concentrating their hardest.

AAJ: You say you compose for them but do you also allow them to play free when you perform live?

TG: Yes, there are big sections of improvisation—that's how I like to write. However, with four horns some of it is tightly scripted, written down and intricate but, having said that, I love giving them the freedom to improvise and using this as a form of compositional technique because I have these amazing players who can play over anything and make things up way better than what I can write. They use it as a tool to take the composition from one place and end up somewhere completely different. This is the essence of jazz and improvisation and exactly how it should be. We definitely play the tunes differently each time, depending on the venue, atmosphere and audience but also how long it took for us to get to the gig.

AAJ: Does the experience of putting gigs and tours together whilst studying at university help develop musicians' business skills?

TG: Definitely. I don't think I would have had the tenacity to keep going. I think we did 18 gigs in the first three months of 2015, including nine in a row, in places like Inverness and London. Trying to line up dates like that for a seven piece band is a huge task so it really helped having that experience and confidence, having done it previously and knowing what to expect. Also, the task of seeking good venues, seeing where other people had played and talking to promoters took a great deal of time and dedication but the end result was worth it: being able to go on tour and just play music.

AAJ: You don't just have the septet, you have a quintet as well?

TG: Yes that's right. It's a new project really, I have started writing tunes for both a quartet and a quintet. I am trying to write some different music for a smaller group which can be played at different venues; I also love playing with a quartet because it gives me more of a chance to improvise. It's less scripted and more organic sometimes with the way we play tunes. It is something that I am exploring at the moment.

AAJ As well as these projects, you also play in a New Orleans style jazz band?

TG: Yes I play in a couple; one is called The Brass Funkeys which is a brass band with a sousaphone, saxophones and trumpets. This band has been formed for four years and we have just recorded a CD. The band plays a lot of festivals and gigs, the most notable being Glastonbury. The other band is called The Dixie Stroller which is a proper trad outfit and we play in the style of Alex Welsh and Louis Armstrong. This is great as well and people often comment that it's a bit strange that I play trad and modern jazz but, to me, it all feeds in really nicely and I use some of the techniques from trad jazz in my writing.