By SAMUEL CHELL
February 20, 2007
Sign in to view read count 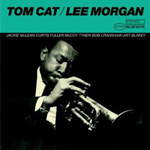 As a cat owner, I've learned the hard way that the outdoor variety of felines quickly exhaust their nine lives. Lee Morgan's Tom Cat must be the exception. Recorded in 1964, the session was first released in 1981 (too late, even, to count as "posthumous"), before its most recent reincarnation as an RVG remaster. Blue Note's reason for originally holding back the date is somewhat of a mystery, since besides the catchy title track it's a session featuring a strong program and sparkling performances by all hands, with the trumpeter/leader, especially, in characteristically good form.

The title tune is programmatic music—a hip version of "The Alley Cat Song" or Mancini's Pink Panther theme—that instantly evokes feline fancies while serving as a perfect vehicle for the trumpeter's bag of assorted tricks, mannerisms and cute devices. Playing off a prowling lower-octave figure in the piano that moves from surreptitious two-beat restraint to straight-ahead wailing Bb blues, Morgan is the musical Tom Cat personified. The pattern remains in place for the ensuing solos by Jackie McLean, Curtis Fuller and McCoy Tyner, all of whom play tastefully and appropriately but wisely elect not to attempt to copycat the trumpeter's act.

Besides the playfully coy musical persona, the trumpeter is also heard as a consummately pure player—one of the baddest bop blowers on the '60s scene—especially on "Twice Around," a kind of high-speed variation on Nat Adderley's "Work Song," the stop-time unison chorus of the three principals yielding to several scorching solo choruses by the leader. The trumpeter's daring and command and the fullness of his sound remind us that, eight years after the death of Clifford Brown, Morgan was no longer the heir apparent: appearance had become reality.

Finally, Tyner's contribution to the date, the ballad "Twilight Mist," is in every way worthy of the composer of the supremely lyrical "You Taught My Heart to Sing." Morgan's sensitive solo, characterized by breathing phrases and expressive shaping but not shading of his rich, generous sound, does ample justice to the song, thus completing the trumpeter's hat-trick of different musical personae—the teaser, the technician, the troubador—on this varied, whole and rewarding program.

My expectations for this recording frankly were not especially high (some Blakey thunder, Tyner power, McLean rawness, Fuller blandness), but the session sounds fresh, inviting, and all-too-replayable even to ears oft-exposed to the individual musicians, the ensemble, the engineering. Blakey moves things along without resorting to excessive bombs and press rolls; the ensemble sections are tight and aggressive yet light and flowing; Van Gelder gets the mix just right, above all creating no potential distractions to the leader's sterling performance.

If it comes down to a showdown between a Tom Cat and a Sidewinder, don't be too quick to write off the former; in fact, it may be the most satisfying, best all-around Morgan-led recording session between Candy (1957) and Cornbread (1965).