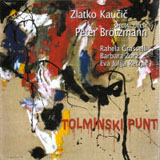 The question of how a non-verbal language can be programmatic to tell a story is always answered through what the language does. In the case of music, melding what instruments say with the visual images or aural associations the instruments trigger challenges the imagination.

Tomlinski Punt is such a programmatic recording. It is taken from a live 2005 date in Slovenia, performed by a quartet led by drummer Zlatko Kau'i'. Kau'i' has put into musical form a historical circumstance described in the liner notes in one brief paragraph about a feudal rebellion that is quashed by imperial force.

Violinist Rahela Grasselli and cellists Barbara Å½orÅ¾ and Eva Julija ReÄnik complete the quartet. The guest artist on this record is Peter Brötzmann, whose versatility for improvised expression of rebellious tension is without parallel.

The introductory four tracks ("Tolminski Punt #1-4) concentrate completely on the interaction of percussion and strings. The violin and cello players create an unconventional string sound by acoustically synthesizing percussiveness. Long-lasting glissandi, rapid bowing, string scraping and a persistent drone midst the drawing out of bent pitches interface with the squeaking, tapping, tweeting, whistling, strumming, jostling and stroking of multiple percussion instruments that include cymbals and drums. This multi-colored dynamic contributes to the depiction of a progressively agitated atmosphere in which the storytelling takes place. The main characters of the story are portrayed by the reeds.

The lengthiest exposition for the reeds occurs on the forty-minute "Tolminski Punt #5, in which the drum set opens up fully to complement large, blustery tenor saxophone arpeggios. Strangely blue notes and vocalizations enter occasionally into the fray, produced through Brötzmann's relentless drive to move his sound upward and outward to overcome the idea of fury. When the drums stop in this part, only the horn is left to make a coherent melody, with Brötzmann's tone creating an unexpected elegance.

The strings fly in a transition from the solo horn to an orchestral largeness which eventually yields to Kau'i'. Brötzmann perseveres in his re-entry as a voice of terrible frenzy that besets the sound scene once again. An inevitable capitulation is heard in the last breaths of the horn sound. But the clarinet intercedes as a metaphorical remnant of the endless battle for equal voice.

The remainder of Tomlinski Punt is concerned with restoration of what has been torn apart. The strings and percussion revive some harmony, in large part because Brötzmann's tarogato leads everyone into a unified field. Because this horn tone is different, the song it sings seems frail, even though it is rich; the rumbling of the tom in the background symbolizing new life.

Within this new life, the drums represent the ground on which the strings can regroup. Their gestures are nurtured by the horn. And, in the end, all the instruments secure energy and wisdom within the bond that is their musicality.