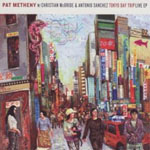 Subtitled Live EP, Tokyo Day Trip is a specially priced gift for those who've missed the opportunity to see guitarist Pat Metheny and his trio of the past couple years, bassist Christian McBride and drummer Antonio Sanchez. At half the length of what a CD can hold, it's 41 minutes of pure gold from the best trio of Metheny's career. The spark that is by no means absent from the trio's studio recording, Day Trip (Nonesuch, 2008), is simply that much brighter on Tokyo Day Trip

Calling this Metheny's best trio is a bold statement about an artist who has previously partnered with Charlie Haden and Billy Higgins, Dave Holland and Roy Haynes, Jaco Pastorius and Bob Moses, and, most recently, Larry Grenadier and Bill Stewart. Each trio had something distinctive to offer, but none were ever this hot; even the ballads possess a simmering intensity. The fiery 12-minutes of the aptly titled "Traveling Fast" not only feature Metheny at his best—combining frightening virtuosity with unmistakable lyricism—but also provide McBride and Sanchez an equal chance to stretch. While this group is absolutely not about competition, there's a playful sense of keeping up with each other, despite no one ever resorting to meaningless technical displays. It's always about the music.

Day Trip's single flaw was Metheny's choice of signature guitar synth on "When We Were Free" and "The Red One." The horn-like tone felt out of place with the warm acoustic and electric guitars Metheny used on most of the disc; equally, the rock/reggae-inflections of "The Red One" just didn't seem to fit. Here, "Back Arm & Blackcharge" is far more aggressively raucous but, even with Metheny's overdriven and heavily delayed tone, it somehow fits perfectly between two acoustic ballads—the nylon-string driven "Inori" and steel-string "The Night Becomes You."

With a knotty, rapid-fire unison melody that still retains that Metheny lyricism, "Back Arm" opens up to a propulsive solo section that blends harder edges and hints of Latin groove, all wrapped up in an elastic setting that—for a guitarist who has described himself as going into "self edit" mode when he knows he's being recorded—is some of Metheny's most unfettered playing on disc. "Reckless abandon" and "Metheny" rarely go together, but they do here, with "Back Arm & Blackcharge" a rare glimpse into a Metheny with few, if any, restrictions—self-imposed or otherwise.

But it's "Tromso" that's the jewel of the disc. Atmospheric, with a folksy vibe driven by Metheny's electric sitar, it's a completely different window into this trio. It's the second longest track on Tokyo Day Trip but, instead of being a solo vehicle, it's the most purely collective track from a trio all about interaction; a taste, perhaps, of the guitarist's early days at ECM, with its rarified air.

Tokyo Day Trip not only surpasses its studio cousin but, by representing so many facets of Metheny's playing despite its relative brevity, stands as one terrific entry point into Metheny's trio work.