Ornette Coleman: To Whom Who Keeps a Record

By KURT GOTTSCHALK
March 8, 2008
Sign in to view read count 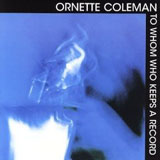 In principle, copies of the Beauty is a Rare Thing (Atlantic, 1992) box set should be issued with every voter registration card; no home is complete without the collection of Ornette Coleman's prodigious 1959-1961 output. A gathering of the six albums released during that time, three later albums culled from those sessions and alternate takes, it is a crucial document of American art.

One of those three later albums, To Whom Who Keeps a Record was released in Japan in 1975 and was unavailable in the US prior to the box set and only now as a single CD. Coleman's work was so solid during that time that this collection is hardly the mismatched-socks drawer that so many "rarities" collections are. Nor is it an epiphany. It casts no unexpected light on the man, the aesthetic or the times. It is simply another great record, most notable for including "Blues Connotation No. 2," or as it is properly titled, "P.S. Unless One Has (Blues Connotation No. 2)." The dogged chronologism of the box set robbed the album of its titling. The tracks as they appeared on the original release (and here) read as a sentence: "Music Always," "Brings Goodness," "To Us," "All," "P.S. Unless One Has (Blues Connotation No. 2)," "Some Other" and "Motive for its Use."

Chronologically, then, it falls between Change of the Century (1959) and This is Our Music (1960), with Don Cherry (trumpet), Charlie Haden (bass) and Billy Higgins and Ed Blackwell (drums). The record invites comparison between Higgins and his replacement, the more off-kilter Blackwell. But those comparisons have been made before and weighing the historic importance of To Whom Who Keeps a Record is rather beside the point. It stands up to Coleman's other work of the time, which means it stands up to the greatest records in the jazz canon. What more could be said?

Music Always; Brings Goodness; To Us All; P.S. Unless One Has (Blues Connotation No. 2); Some Other; Motive for its Use.

Title: To Whom Who Keeps a Record | Year Released: 2008 | Record Label: Water Music