Sebastian Liedke Trio: To Walk In The Past

By BRUCE LINDSAY
December 5, 2010
Sign in to view read count 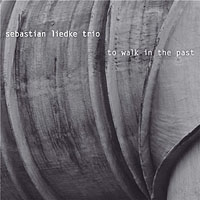 Piano, bass and drum trios abound in jazz: their history mirrors the history of the music itself and many of the greatest jazz players have worked within the format. Any new piano trio has to face up to some stiff competition if it is to leave its own unique mark. The Berlin-based Sebastian Liedke Trio is new. To Walk In The Past is its debut recording—and it's one of the freshest and loveliest releases of 2010.

Bassist Liedke, pianist Dirk Flatau and drummer Lizzy Scharnofske have created a life-affirming album that serves to establish this trio as a band of tremendous potential. To Walk In The Pastsucceeds not simply because of the musical talents of the individual players but also because of their ability to work as an ensemble. While Liedke wrote all but two of the tunes, the album is emphatically collaborative, each member of the trio contributing musical ideas, supportive rhythm playing and warm, delicate solos across its ten tunes.

The opening bars of "04:15—A Morning On Hamdan Street" set the album's mood perfectly. The tune is melodic and laid-back with soft, atmospheric percussion, crystalline piano and a mellow but swinging bass from Liedke. This gentleness and melodic sensibility characterize the music, but there is plenty of variation in emotion and tone which ensures that the music never feels repetitive. "Fluse Im Kopf" comes closest to the sound of classic American jazz, with its occasional resemblance to Ira Gershwin and Vernon Duke's "I Can't Get Started," but for the most part the Trio is more firmly rooted in the melodic European jazz of players such as Tord Gustavsen, or even the more reflective moments of fellow German trio, [em].

Flatau contributes two compositions: "Ella" and "Leo." Both tunes share the lyricism and beauty of Liedke's writing: "Leo" is centered on Liedke's repetitive and hypnotic bass line while "Ella" has a classical feel to its melody. Liedke's "Hallo Frau Winter" bucks the trend of the rest of the album with its more up-tempo, Latin-influenced groove. Scharnofske's drumming is more dominant than usual, although her characteristic light touch remains for the most part, while Liedke's bass is at its most energetic. "Tale of a Silent Karl" is the album's most mysterious tune, with a disquieting and funereal rhythm over which Flatau plays a sparse, staccato piano line and Scharnofske adds some loose, metallic percussion.

Liedke, Flatau and Scharnofske have created an exquisitely beautiful album—emotive, inventive and lyrical, To Walk In The Past is an outstanding debut.

04:15-A Morning on Hamdan Street; Ella; Leaving Berlin; The Beast In You; Hello Frau Winter; Tale of a Silent Karl; Fluse Im Kopf; Leo; To Walk In The Past; Ein Stuck Berlin.

Title: To Walk In The Past | Year Released: 2010 | Record Label: Self Produced