Nicky Schrire: To The Spring 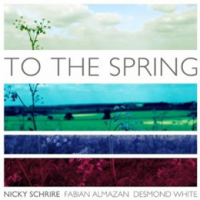 It's brief—barely 30 minutes long—and released only in digital form, but To The Spring packs plenty into its allotted time span. This is the third release from singer and songwriter Nicky Schrire. It's another excellent release, her voice framed by the sparse but sympathetic piano and bass of Fabian Almazan and Desmond White.

Schrire's voice matures and grows more confident with every release. It's technically impressive, but more importantly it's striking in its ability to inhabit and project the emotions of her lyrics. Her voice is distinctive—a mix of her British birth, South African upbringing and New York home. If there is a point of comparison it seems to come from folk and Americana rather than jazz—the McGarrigle sisters, perhaps even Iris DeMent.

Schrire's impressive debut, Freedom Flight (Circavision Productions, 2012), included songs by writers such as James Taylor, Bob Dylan and Loudon Wainwright III (once married to Kate McGarrigle). Album number two, Space And Time (Magenta Label, 2013), again featured a range of covers. Instead of the debut's backing band, it pared down the backing to just a piano. To The Spring is Schrire's first fully self-penned collection. It's a strong half dozen, full of charm, lyrically arresting and with a strong sense of narrative.

Schrire's love of wordless vocals, already apparent on Freedom Flight, continues. Such an approach is expressive and enables her, as a vocalist, to engage in improvisation—her avowed favorite aspect of jazz music. At its best it heightens the impact of the song, as on "Your Love" and "Give It Away," when Schrire multi-tracks the vocals for added impact. On "To The Spring," however, the wordless vocals verge on the melodramatic, coming close to breaking the almost magical spell conjured by Schrire's fragile lead vocal and Almazan's considered and sympathetic piano.

"Traveler" is the collection's killer song, an absolute classic in waiting. A simple melody, a rhythm made all the more engaging by White and Almazan's unison playing of its repeated three-note phrase and Schrire's purest performance. The lyric, about a travelling musician, tells a story—a more innocent "Superstar" at first, but with a twist that turns the tables as the musician ends up writing songs "in empty rooms." To The Spring is an emphatic demonstration of Schrire's talents: she's in no danger of such a melancholy fate.

Traveler; Your Love; To The Spring; Fall Apart; Father; Give It Away.

Title: To The Spring | Year Released: 2014 | Record Label: Self Produced