Amikaeyla & Trelawny Rose: To Eva, With Love: A Celebration of Eva Cassidy Live 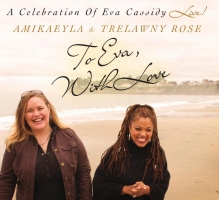 Singer Eva Cassidy was a force of nature, an incandescent slice of lightening that flashed and was no more. Best described as a song stylist, Cassidy was an excellent guitarist capable of interpreting standards from any genre in an almost violently refreshing and personal manner. Cassidy's career lasted barely 10 years and never garnered the attention she deserved. Closing in on 30 years after Cassidy's death from malignant melanoma, it is humbling to consider such immense talent would only garner a cult following.

Singer/songwriters Amikaeyla Gaston and Trelawny Rose honor Cassidy with a tribute performance of songs with which the late singer was closely associated. Behind the pair, a superb band, featuring trombonist Wayne Wallace, who brings a Wayne Henderson-like soul to the band and performances. True to Cassidy, Amikaeyla and Trelawny achieve like creative genius in their arrangements of these songs. And those songs come from Johnny Mercer to Sting—a musical panorama.

Central among Cassidy's songbook was the Harburg/Arlen gem "Over the Rainbow." With obvious great love, the two singers rearrange Cassidy's sublime version, providing Wallace an emotive solo space of which he takes ample advantage. The arrangement is vocally intricate, revealing all of the beautiful recesses of the song. The pair accomplished the same with Cyndi Lauper's "Time After Time," where Amikaeyla and Trelawny pull out all of their gospel stops and testify. They slay Curtis Mayfield's "People Get Ready" accordingly, with Wallace's trombone acting as Holy Spirit.

So unique and fresh are these interpretations that their paying tribute to a singular talent is but the gravy in this recording. Doug MacLeod's "Nightbird" shimmers with Vince Mellone's slide guitar and Simon Rochester's churchy organ. "Danny Boy," with its trombone introduction, turns into an extended responsorial psalm, praising all that is right and good. The two singers weave harmonic lines carefully managing the intended tension. Cassidy's show-stopping "Wonderful World" proves the same on this, one of the finest recordings of the year.

About Amikaeyla and Trelawny Rose