By EDWARD BLANCO
November 12, 2006
Sign in to view read count 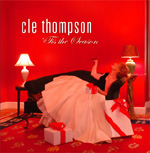 With Thanksgiving soon approaching and Christmas not far behind, the holiday season is just around the corner—and with it, the traditional holiday music that we're all accustomed to hearing this time of the year. To help celebrate this Christmas, North Carolina vocalist Cle Thompson has made Tis the Season, one of the most beautiful jazzy Christmas albums I've ever heard. Thompson has performed in jazz clubs from Los Angeles to New York, and she also has an extensive background in theatre. Thompson recorded this project in both Los Angeles and her home town of Winston-Salem, NC.

Thompson is a wonderful singer who knows how to belt out a tune with grace and style. She employs a host of musicians to provide musical support, and aside from the usual rhythm section instruments (piano, bass and drums), there is plenty of space provided for vibes, percussion and guitar. The result is a very melodic jazzy take on some of the best well-known Christmas songs ever recorded.

Wait until you hear Thomson's voicing of "Santa Clause is Coming to Town, a somewhat mellow version of the classic. I loved "Have Yourself A Merry Little Christmas, featuring solo work by Bob Leatherbarrow on the vibes. Thompson sings in Spanish on the salsa-flavored, hip-moving "Feliz Navidad, showcasing percussionist Ray Armando. The lady takes on Portuguese on the soft and warm "Si Todos Fossem Iguais A Voice.

Without question, my favorite piece here is the time-honored Mel Tormé classic "The Christmas Song. Somehow I don't think the great Nat King Cole would have minded Cle Thompson's rendition of this immortal tune. The vocalist sings with heartfelt emotion, supported by Theo Saunders' crisp, appreciable chords on piano, making this one very memorable piece of music destined to be played often.

Tis the Season, a truly enchanting and jazzy session of Christmas music, documents a series of captivating performances by a first-rate vocalist interpreting some of the most beautiful holiday songs. After one listen of this disc, I could understand why Santa might replace his usual "Ho! Ho! Ho!" with one big "WOW!"