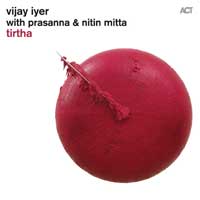 A confluence of ideas is encountered in the kinetic and unusual Tirtha, featuring three South Asian luminaries: the critically acclaimed jazz pianist Vijay Iyer; and his equally accomplished trio-mates, guitarist/composer Prasanna, and tablaist Nitin Mitta. Iyer formed the band in 2007 when asked to put together a concert celebrating 60 years of Indian independence. The title (also the band's name) has significance, as "tirtha" (pronounced THEER-tha), is the Sanskrit word for "ford" or "crossing," a shallow part of a body of water that may be easily crossed, as in a pilgrimage near sacred waters.

With this mindset, the recording crosses the channels of jazz and Indian music, eschewing the hybridization of the two styles; a semblance of familiarity but also something entirely fresh. The nine tracks contain robust elements of ethnicity, thriving improvisation, and exhaustive composition; steeped in modern and old worlds. In the sweltering tempo of "Tribal Wisdom," Nitin Mitta's masterful percussion, which flows like water, is juxtaposed against Iyer's free and classical pianism, while Prasanna's guitar lexicon is informed of Jimi Hendrixian progressiveness, the classic Carnatic form of Southern India, and other world influences.

A journey of mood and sound, Iyer's title track is resplendent, a work perfected in the capabilities of musicians and their instruments to move as one, like the rise and fall of a tide. "Abundance" is not only hypnotic but emotive, and the numerology of "Gauntlet"s is impressive, as the pianist improvises over a machine-like syncopation. "Polytheism" finds the trio navigating through dangerous changes, but landing safely, whereas Prasanna's "Entropy and Time" reaches the recording's apex. Like a bridge over trouble waters, the guitarist's riff moves, at first jaggedly, but ultimately threads itself into a pastoral Indian folk-tune melody. Whatever the intent Tirtha is a mesmeric project, one of unity and harmonious communication.