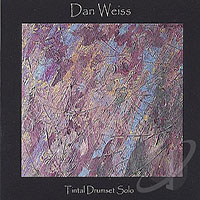 Since emerging on the New York scene a few years ago, drummer Dan Weiss has managed to involve himself with some significant names, including saxophonist David Binney and guitarists Joel Harrison, Gary Lucas, and Rez Abbasi. And while he's clearly demonstrated a broad reach, it's his work with Abbasi—both in performance and on Abbasi's latest album, Snake Charmer—that reveals his special interest in Indian music, albeit, in Abbasi's case, with a more contemporary bent.

Weiss has, in fact, been studying tabla and Indian classical music with his Guru (teacher) Samir Chatterjee since '98, making him especially well-suited for Abbasi's fusion of the Indian improvising tradition with a Western harmonic aesthetic. But Weiss' interests go much deeper than that, as he proves on Tintal Drum set Solo, where he takes the concept of a traditional Indian tabla solo and migrates it to a conventional drum set. The hour-long performance, also featuring guitarist Miles Okazaki's simple yet hypnotic melody that develops from a more languid tempo to a faster pace by the album's end, as well as Weiss' own percussive Indian vocalizing, seems to go by in no time.

When listening to Tintal Drum set Solo, the trick is to reverse more conventional roles. Whereas, in a typical Western context, one would expect the guitar to be the melodic centre and the drums to be the rhythmic support, here one needs to place Weiss' kit up front, with Okazaki in the supporting role. This becomes even more evident when referring to Weiss' detailed liner notes that reveal how the piece—actually consisting of 42 separate sections—is built on a number of different compositions. Focus too much on Okazaki, and you lose sight of that fact; but reverse the roles and the melodic variations become far clearer.

There's often talk about jazz drummers who approach their kit in a melodic way—Bill Stewart, for example—and what makes Tintal Drum set Solo such an engaging listen is Weiss' similar propensity for using every part of the drum set as a lyric component, the same way the tabla is able to articulate its own melodic framework.

As much as Tintal Drum set Solo can be an intriguing listen if one is able to stray from conventional thought, it's also a remarkable technical achievement when one considers that the tabla are played with hands and fingers in close proximity, while the drum set requires greater range of physical motion. In the same way that, for example, Western classical compositions for piano have been adapted to guitar, Weiss has taken the challenge of translating music written for one instrument to another that—while both are percussion instruments—is completely different when it comes to execution.

Tintal Drum set Solo may be of special interest to drummers who want to hear the melodic potential of their instrument fully exploited, but is of equal interest to anyone who can dispense with predisposition and accept the drum set's broader possibilities.