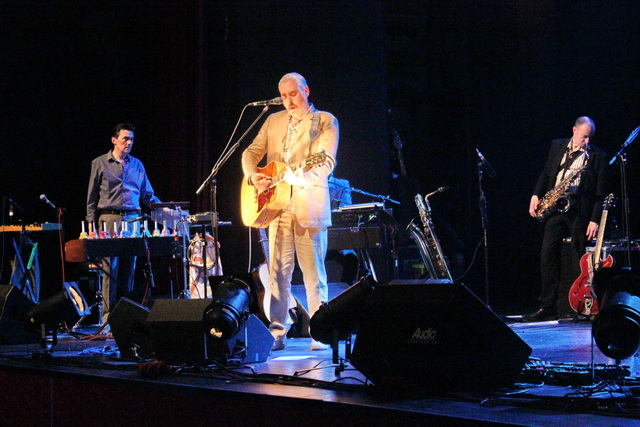 Two decades into its career, the British band Tindersticks has plenty to be happy about. It's been 20 years since the band released its first single, which means that 2012 marks its anniversary, and there is the new album, the critically acclaimed The Something Rain (Constellation Records, 2012). While most bands, after an existence spanning at least a decade are, as conventional wisdom states, simply content just to consolidate past glories, Tindersticks is actually getting better with age. Since its beginnings, the band has been steadily drifting away from the Zeitgeist, carving its own path despite current trends. Never truly enormous, it has survived largely because of its songsmith abilities and an enviable live reputation which has forged the band its loyal fan base.

Midway through its current tour in support of The Something Rain, the band has hit an impressive number of cities in recent few months. Anticipation for Tindersticks' Serbian gig was high, with people gathering early at the Pozorište Mladih (The Youth Theater), in the center of Novi Sad, as there was a supporting opening act, the French multi-instrumentalist Thomas Belhom. Tindersticks sauntered onstage smiling and waving, despite having traveled 25 hours from the previous city on the tour. Creating an immediate sense of intimacy at the theater brought a relaxed, warm energy and an easy confidence to the room, as the band blended its newer material with some of songs from its past.

The group opened with "Blood," a beautiful and fragile song from Tindersticks' self-titled 1993 debut, with singer Stewart Staples' shivering baritone reaching tender emotional depths. This was followed by the equally gentle "If You're Looking for a Way Out" and the riveting "Dick's Slow Song," with Staples sharing vocals with keyboardist David Boulter. Just like its records, the band has always favored low-key opening tracks to lure an audience into its own enchanted world, and these songs were a perfect warmup to what was to follow.

The introduction of the new songs actually made a big difference and shifted the whole vibe to appropriate and exciting heights. "Chocolate," started as a tranquil and ruminative piece of music featuring Boulter reciting his prose poem, beginning with the perfectly appropriate opening lines:

"It had been the perfect Friday afternoon

the job was almost done."

It evoked a melancholic, Pink Floyd-esque kind of sonic embroidery not unlike "Echoes," from Floyd's Meddle (Harvest, 1971), and built on dynamics for the next ten minutes. Adding to these dynamics were "Show Me Everything" and, even more, the hurried and emotionally charged "This Fire of Autumn"—a beautiful and captivating outpouring of emotions, with Staples pouring his heart and soul into every word. The band enjoyed an easy harmony and seemed to genuinely enjoy playing together. After so long on the road, Tindersticks has sharply honed its act; its undiminished love of music was evident and notable. What was also noticeable was the group's ability to connect to its audience in a way rarely seen these days.

In the end, the band rewarded its enthusiastic audience in kind, with 18 songs (including two encores) featuring songs like "4.48 Psychosis," "Medicine" and "Cherry Blossoms," as well as Staples asking for songs that were not in the set list. Much to his amusement, and with a grin on his face, he played the first chords of "Tiny Tears" on acoustic guitar, a semiprecious stone from the band's earliest years, eventually turning and asking the band to help him out. This only added to the band's charm after 120 minutes of a carefully selected set list, with only occasional glances at its enormous back catalog.

The show went way above the expectations, to say the least. At the evening's close, the audience treated the band to several standing ovations that must have lasted well into 10 minutes. The Tindersticks produced a spellbinding evening that comprehensively showed its songwriting and performing talents.