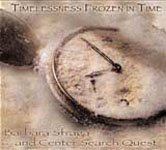 New York-based jazz singer Barbara Sfraga is not afraid to take musical steps forward (or sideways) and that shows fully on Timelessness Frozen in Time. Previous albums Oh, What A Thrill( ( Naxos, 1998) and Under The Moon (A440, 2003) have exhibited Sfraga's ability to at least partially deconstruct the Great American Songbook and provide a sprinkling of originals. On this new effort, Sfraga has composed all but one of the tunes.

The sole non-Sfraga composition typifies the spirit of this new effort. Stevie Wonder's "Tell Me Something Good" was a hit for Rufus in the late '70s and is combined with a rap sequence ("One Thang"). It is more or less typical of the R&B infusion into much of this album. Sfraga opens up the tune with some jazz phrasing, so that the listener may keep asking if this is R&B with jazz overtones or jazz/R&B. Tenor saxophonist Allen Won provides his best soulful Stanley Turrentine solo.

The opening "Hang On, Fly Home" is a groove-oriented R&B toe-tapper. "Tell Me" and the title tune are presented as ballads that would fit well into smooth jazz airplay, with Won providing the tenor and soprano sax obbligato. The tunes play out like those sung and popularized by femme R&B artist Angela Bofill in the '80s and '90s. Is there a connection to Barbara Sfraga's last album in which the title song was a Bofill hit?

The only jazz singing, per se, is on "Cool Water," in which Sfraga's lyrics remind me of Annie Ross' "Twisted" and are delivered in a similar trip-hammer manner. On "Be There," another ballad, Sfraga turns the lights down low. Is it a coincidence that drummer (or Soundrhythium player as he is called here) Michael "T.A." Thompson switches to brushes on both of these tunes?

Barbara Sfraga has been working with her Center Search Quest quintet for some time and, in fact, the band provides some of the material, especially developed for her. While I alluded earlier to smooth jazz airplay, a lot of the music falls into the cracks between genres and Sfraga will have a hard time getting jazz radio airplay on some of these compositions. It is too "smart" for smooth jazz and too funky for R&B jazz radio. Let's hope that someone sees the potential.

Inasmuch as Sfraga now calls herself a "voicist," her musical colleagues have also adopted monikers with Christopher Dean Sullivan being a "bass aritisan" and the aforementioned Thompson a "Soundrhythium" player.

Hang On, Fly Home; Tell Me; Cool Water; Dancing in the Rain; Tell Me Something Good/One Thang; Timelessness Frozen In Time; All Night Long; Be There; Love Breaks Free; I'm In The Light.