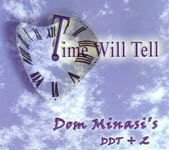 Dom Minasi had a brief relationship with Blue Note Records in the mid-‘70s, when he released two recordings and then, disillusioned by the changes in label direction, walked away from recording for nearly twenty-five years. While he continued to play in the intervening years, honing a style that seems to combine a warm tone and slightly skewed straight-ahead approach, he did not begin recording again until 1999. Time Will Tell , his third release for his own CDM Records since 2001’s Takin’ the Duke Out , is an album that is filled with lofty ambition but, while competent enough, never really takes off.

Minasi cites more outward-reaching artists including Eric Dolphy, John Coltrane and Cecil Taylor as seminal influences; and, to be sure, there is an element of the extreme in his playing. But his articulation is muddy as he attempts rapid-fire, harmonically outside lines; and while he has a certain command over his instrument, his playing lacks engagement.

With a traditional bass and drums trio that is augmented by cellist Tomas Ulrich and, on one track, vocalist Carol Mennie, there is plenty of rhythmic variation in a set that includes Wayne Shorter’s “Witch Hunt” and Monk’s “Round Midnight.” The balance of the set consists of Minasi’s originals, which more often than not are rooted in other peoples’ music. “DMP” is a clever reassessment of Miles’ “All Blues”; “Be Op Be Op Be Ah” is a reworking of Dizzy Gillespie’s “Night in Tunisia”; and “John” takes the beginning phrase of Coltrane’s “Giant Steps” and uses it to build a dark ballad. None of these reinventions add anything to their sources, and try as they might, the rhythm section never really gels.

The addition of cello could be considered a way of adding an edge to the music, and Ulrich has been associated with many fine experimental recordings, including those with Mark Whitecage, Ivo Perelman and Dominic Duval. Sadly, his improvisations lack his usual panache; normally as interesting as, for example, Erik Friedlander, here he doesn’t seem overly inspired.

And that’s the real problem with the whole recording. Each member of the group is a fine musician. Bassist Ken Filiano has supported some fine groups, including Vinny Golia and Fred Hess; drummer John Bollinger has a capable, albeit conventional style. But together this group never generates much excitement; everyone seems to be going through the motions but nobody seems emotionally attached to the proceedings.

And that’s the shame. After a long hiatus, and a reputation as one of New York’s best kept secrets, the expectation level is high. Unfortunately Time Will Tell is not the recording that will put Minasi on the map; hopefully he has more in him that will see him garner the attention he apparently deserves.

Visit Dom Minasi on the web.

Witch Hunt; Time Will Tell; DMP; My Soul Cries Out; Be Op Be Op Ah; John; Waltz for Eric; "Round Midnight.