By WILLIAM CAREY
November 19, 2011
Sign in to view read count 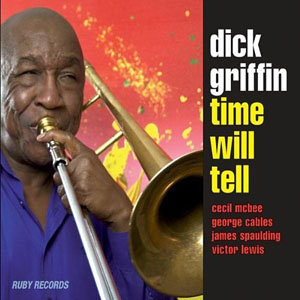 This set of eight original tunes, all penned by trombonist/leader Dick Griffin is a testament to the old KISS adage: keep it simple, stupid. Get some good players together, write some straightforward melodies, and blow, and Griffin has assembled some good players

"Could It Be the Blues" strikes the perfect mood to open this record. Few instruments lend themselves to a blues as well as a trombone. Naturally plaintive, in the hands of a player like Griffin, the instrument takes on a human quality, an extension of the trombonist's voice. Griffin is widely known in the free jazz world and has made a name for himself for his circular breathing technique, but here—and throughout the session—he sounds happy to be just blowing, carefree. This is a blues in 3/4, with a few nice little twists along the way.

"Home Song" is a very intuitive, hummable song with a memorable melody, while "For the Love in My Heart" cries out for lyrics. "Let's Take a Chance" shows off Griffin's ability to take a simple, singable little tune and craft it into a complete song—nothing fancy, just respect for where the melody wants to go. As with much of the record, this is a strong showcase for his sidemen, though there really are no sidemen on a project like this, especially with players of this caliber, and here everyone contributes to getting the songs off the ground and keeping the energy going.

The combined experience of the group is quite something, typified by alto saxophonist/flautist James Spaulding—always such a joy to hear, and this record is no exception. The songs featuring him on flute ("My Fantasy," "Time Goes By") are some of the best of the set. His original plays off of the very famous title track, and the entry of flute, followed by bassist Cecil McBee and Griffin are sonically scrumptious.

The band is at its finest on the cookin,' slightly sinister and vamp-driven"Mind Over," while the closing title track is like much of the record encapsulated. It features a very catchy phrase, endearingly played loosely by a front line of interesting sonic textures, followed by solid solos and empathetic accompaniment. Easy as pie.

Griffin is a wonderful musician who has contributed mightily to improvised music. He is also a very talented painter, and is responsible for the wonderful cover art featured on Time Will Tell.

Could It Be The Blues; Home Song; For The Love In My Heart; Let's Take A Chance; Time Goes By, Mind Over; My Fantasy; Time Will Tell.