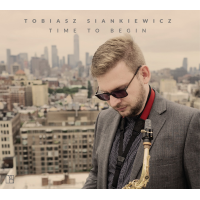 Not all debut albums are blooming with the self-confidence and boldness that saxophonist Tobiasz Siankiewicz displays on Time To Begin. But then there aren't many driven, direct and forward-thinking artists such as Siankiewicz with a passion and skill for timeless jazz tones, especially on a first time to bat. What's really amazing about his sound is definitely the fact that he maintains a high level of sophistication without compromising in terms of accessible appeal. In other words, this music is not just for jazz purists. Anyone can enjoy Time To Begin because this release has much to offer to all fans of great music. That divide between art and commerce is a fragile one, and it can easily break by swaying towards too much of another. However, Siankiewicz is able to accomplish that balance throughout the record.

The project contains six original songs of varying moods and tempos, including the suggestive "Harlem By Night," one of his most striking cuts. The vivid, cinematic atmosphere of this track reels in the ears like a powerful magnet. It almost makes one feel like a character in a Woody Allen movie, exploring the streets of Manhattan during an evening stroll. Siankiewicz would make a fine film composer as he certainly has an eye for the cinematic with his saxophone playing.

In addition to that, "Sky Dive" is easy to love, a sublime example of how Siankiewicz can stretch his musical vocabulary in order to speak with a truly progressive yet melodic language.