By JOHN EPHLAND
September 27, 2014
Sign in to view read count 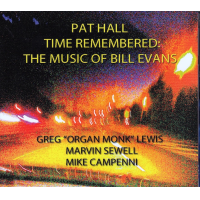 The unconventional inside a conventional skin. That's what we have here with trombonist Pat Hall's offering Time Remembered: The Music of Bill Evans. Playing it from the bottom up, so to speak, Hall's approach to the Evans corpus (along with two standards associated with the late pianist, Rodgers and Hart's "Spring Is Here" and Earl Zindars' "Elsa") is also unconventional due the presence of organist Greg "Organ Monk" Lewis laying down the chordal framework. Along with guitarist Martin Sewell and drummer Mike Campenni, these seven covers are played relatively straightforward, with few twists and turns to accompany the unique instrumentation upfront.

One of the strengths of Time Remembered, as with any successful interpretative project, is hearing Evans' music convincingly played through another musical prism. In a sense, it takes balls to essentially change the palette of an artist who is known more (at least for the majority of his career) for introspective, dreamy and impressionistic jazz. Instead, what we get with Time Remembered is music laced with elements of grease, plangent tones, not to mention groove. The band mostly swings through up-tempo versions of the songs here, with the exception of the title track and "Spring Is Here."

Perhaps a model example of what I mean can be heard with the band's up- tempo drive on "Elsa," where the waltz becomes a kind of merry go round of solos inside heads and tails of the melody that seem almost abrupt; as if everyone had their ears leaning toward the exploration of this lovely theme. Likewise "Know What I Mean?" which seems more like a vehicle for blowing than a tune selected for its melodic content. That's just fine here, because some of the best playing surfaces with Hall leading the charge, his rhythmic feel for this up-tempo swing along with fluid note choices that combine a sense of urgency with a facility to hit those notes at every point on the register have us forgetting this is a Bill Evans number. Add some of Lewis and Sewell's best playing here as they seemingly glide across the changes (along with seamless bass pedal work from Lewis) and you get the impression this is a tight rhythm section, a rhythm section that finds Campenni's drumming elastic, supportive, unobtrusive and above all swinging.

On the whole, Time Remembered isn't an introspective visit to the music of Bill Evans. Even "Time Remembered," a classic ballad from Evans early years as a solo artist, is ultimately rendered as a medium-tempo swinger as the band works it way through and past the song's evocative theme. That said, their version again showcases Hall's facility on the trombone, with a clear tone that carries a typically flat resonance that still manages to soar.

Given the strengths and staying power of Bill Evans' compositions, most of which carry unusual chord substitutions, novel intervals and a definitive rhythmic approach, it's no wonder these versions would tend to be played straight down the middle, conventional more by normative jazz standards. Contrast this recording with, for example, guitarist John McLaughlin's own Time Remembered (Verve), where the instruments are all acoustic, the guitarist accompanied by a string quartet of four guitars and one bassist in what is ultimately a very classical, almost otherworldly and perhaps too respectful tribute. By way of contrast, this more recent release—heard through the musical lens of this quartet's sound—is no doubt shaped and corralled by Evans' strong musical personality but, in the end, plays like a band in a groove that just happens to be filled up with some pretty memorable tunes.