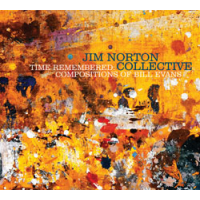 The late Bill Evans was so celebrated a pianist that even some partisans may overlook the fact that he was also a splendid composer with a number of oft-revisited jazz themes to his credit. Saxophonist / arranger Jim Norton hasn't forgotten, and has entrusted Time Remembered, his debut album as leader of the Jim Norton Collective, to music written and sometimes performed by Evans (with one exception, to be explained in due course).

These fourteen songs are described by Andrew Gilbert in his brief liner note as "overlooked treasures," which may account for the omission of Evans' best-known composition, "Waltz for Debby" (no other reason is given). What is encompassed is indeed gem-like, from the playful fugue "Fudgesickle Built for Four" (performed twice, in disparate versions) to the time-shifting, brass-infused "34 Skidoo" and everything in between. As implied, one of the songs—"Journey to Recife"—is an anomaly, as it wasn't written by Bill Evans but was attributed to him for years, having actually been composed by Richard L. Evans. As Norton's group had been playing it for more than three decades as a "Bill Evans tune," the decision was made to keep it in the album and give Richard Evans his overdue credit. Good choice.

Evans, who swung as hard as he had to, could also write pretty, as witness "Time Remembered," "Laurie" or "Comrade Conrad" (the last a jingle designed for a Crest toothpaste commercial). The flutes are especially engaging on "Conrad," while "Fudgesickle"s' reprise, opening at a far more deliberate tempo, bears scant resemblance to the album's sunny curtain-raiser until more than three minutes have elapsed, when merriment sets in. The twelve-member Collective experiences no problem with that, and in fact handles every challenge as to the manor born. Norton, for his part, inscribes charts that are consistently sharp and tasteful.

Norton solos on clarinet ("Walkin' Up") and baritone (the adventurous "Twelve Tone Tune") while bassist John Shiflett is featured on "Time Remembered," guitarist Scott Sorkin on "Bill's Hit Tune," tenor Charlie McCarthy on "Laurie." Others who unleash their weapons and cleave the target include alto / soprano Tim Devine, tenor / flutist Kris Storm, trombonists Joel Behrman and Jeff Cressman, trumpeters John Worley and Louis Fasman. Drummer Jason Lewis anchors the Collective's rock-solid rhythm section. This is music that should be heard more often, deftly performed by an ensemble with no discernible weaknesses. Well worth seeking out.