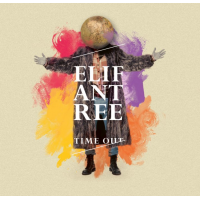 From the opening whoop from Elifantree's singer and principle songwriter, Anni Elif Egecioglu,Time Out presents itself as something mysterious. As the name of the trio elliptically suggests, Egecioglu is the principle focus, with saxophonist Pauli Lyytinen and drummer Tatu Rönkkö making up the "tree."

In comparison with its well-received debut, Love and Trees (Eclipse, 2010), Time Out is something of a return to the fold of convention, but very much Elifantree's own type of experimental, pop-influenced mainstream. Despite the predominance of voice, sax and drums, some archetypal synth and keyboards slip into the mix on ''Where's Your Courage,'' with the echo effect on Lyytinen's saxophone frequently turned way up. If comparisons between Egecioglu's mezzo-soprano and Tori Amos are accepted, the so, too, must a similarity to nu-wave French vocalist Jeanne Added, who has been described as a female Captain Beefheart in her enthusiasm to sing around or even through a melody. Egecioglu shows similar disrespect for melodic conventions, and uses the versatility of her voice to emphasize the roles which she plays through her lyrics. It's a style that takes a little getting used to.

Many of the songs form an internal dialogue, where Egecioglu leads Lyytinen and Rönkkö in chasing down the ideas that flow from "that girl" highlighted in the lyrics. Thankfully there is relief from the intricacies of this internal dialogue with some punchy upbeat songs like "Puppet Show" and the closing title track. As writer Stuart Nicholson observed in 2009, this is a band well-endowed with performance skills—even showmanship. Time Out gives plenty of scope for live interpretation, turning the opaqueness of Elifantree's lyrics and approach into a show that meets a younger audience right on its level.

Tic Toc; That Girl; Where's Your Courage; The eye; She's Changed; Waiting; Puppet Show; How About a Little Love; Time Out.